An Exclusive Advance Screening of

Followed by a Q&A with SCA Alumnus and
Writer/Director/Producer Scott Derrickson '95. Moderated by Tim Dowling  '96. About The Black Phone 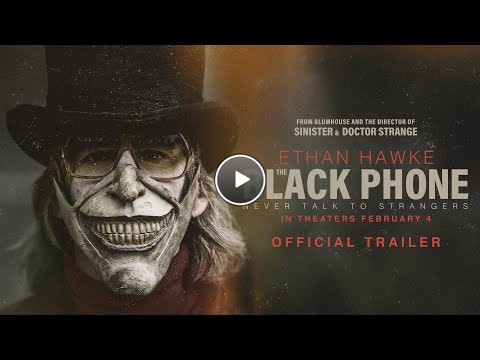 The phone is dead. And it’s ringing.

Director Scott Derrickson returns to his terror roots and partners again with the foremost brand in the genre, Blumhouse, with a new horror thriller.

Finney Shaw, a shy but clever 13-year-old boy, is abducted by a sadistic killer and trapped in a soundproof basement where screaming is of little use. When a disconnected phone on the wall begins to ring, Finney discovers that he can hear the voices of the killer’s previous victims. And they are dead set on making sure that what happened to them doesn’t happen to Finney.

Starring four-time Oscar® nominee Ethan Hawke in the most terrifying role of his career and introducing Mason Thames in his first ever film role, The Black Phone is produced, directed, and co-written by Scott Derrickson, the writer-director of Sinister, The Exorcism of Emily Rose and Marvel’s Doctor Strange.

SCOTT DERRICKSON '95 is an award-winning director, producer, screenwriter and co-founder of Crooked Highway. Derrickson directed and co-wrote such films as The Exorcism of Emily Rose, Sinister, Marvel’s Doctor Strange and The Black Phone. Derrickson has also been announced as the director of the sequel to the 1986 film Labyrinth.

About the SCA Network

The SCA Network is a social organization open exclusively to alumni and students of the USC School of Cinematic Arts. Designed as a fun way to stay in touch and connect with fellow SCA Trojans, members have access to special preview screenings and events throughout the year. Funds raised through support of the SCA Network provide for current needs of the School including equipment, student support, and facilities.

Membership to the SCA Network begins at $25 per year. Information on the SCA Network as well as a list of levels and benefits can be found online at cinema.usc.edu/Network.

Look out for our new slate of programming beginning this summer, and welcome to The Network!

This screening is Free and Open to the Public. Members of the SCA Network have priority registration and check-in for this event.

Please bring a valid USC ID or print out of your reservation confirmation, which will automatically be sent to your e-mail account upon successfully making an RSVP through this website.

Check-in will begin at 6:15 P.M. for SCA Network members and their guests. General RSVPs will begin check-in at 6:45 P.M.

Parking at the University of Southern California is currently very limited and it is best to visit the USC Transportation Website for the most up-to-date information if you plan to drive and park on campus: