Outside the Box [Office] and Northwestern Mutual invite you to attend Face coverings are required at all indoor events, regardless of vaccination or testing status, on USC campuses, in USC buildings and all off campus USC events. Face coverings must be a surgical mask, N95, or KN95. Cloth face masks, gaiters, bandanas or other non-surgical grade masks are not permitted.

This event is sponsored by the 63 for 63 Screening Series, presented by Northwestern Mutual.

About The Loyola Project 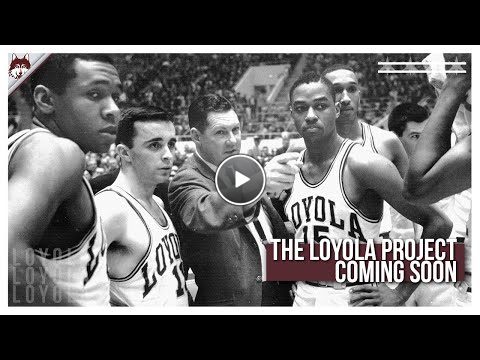 In 1963, at the height of the civil rights movement, the Loyola Ramblers of Chicago broke racial barriers and changed college basketball forever. Now, nearly 60 years later, this legendary team is reexamined by Loyola basketball player and co-captain, Lucas Williamson. Lucas is also a Northwestern Mutual Intern.

Woven together with archival footage and modern day interviews, this captivating story continues to provide inspiration in the fight for equality.

Hailing from the windy streets of Chicago, and a proud University of Notre Dame alumn, Pat came west where he received a Master’s Degree in Cinematography from the American Film Institute. There, he partnered with Christine O’Malley, and thus, O’Malley Creadon Productions was born! Though his career began as a camera operator at PBS, his aspirations were set much higher and his directorial debut, Wordplay (2006), was the breakout hit at the Sundance Film Festival that year. He’s gone on to direct numerous other feature documentary projects, commercials, television and has sat on panels and juries for various film festivals around the country.

Doug Blush is an award-winning director, producer, editor, writer and cinematographer whose work includes over 140 feature and television projects, and is a member of the Academy of Motion Pictures Arts and Sciences (AMPAS) as well as the American Cinema Editors (ACE).

His recent credits include, as consulting editor and co-producer, the 2019 Academy Award winning PERIOD. END OF SENTENCE, the 2018 Academy Award winning ICARUS, and, as supervising editor, the 2013 Oscar-winning 20 FEET FROM STARDOM, for which he also received the ACE Eddie Award for Best Documentary Editing.  He was Co-Editor and Associate Producer of Kirby Dick’s THE HUNTING GROUND in 2014, and the Oscar nominated and Emmy winning THE INVISIBLE WAR in 2012.  Other major recent films include MR. SOUL! (IDA Award Winner, 2018), JIM: THE JAMES FOLEY STORY (HBO Emmy winner, 2017), THE MUSIC OF STRANGERS (HBO Best Editing Emmy nominee, 2018) CHASING CORAL (Netflix Emmy Winner, 2018), THE MARS GENERATION (Netflix, also as executive producer), ON HER SHOULDERS and DARK MONEY (both Oscar Shortlisted for 2019) and KING IN THE WILDERNESS (HBO), and earlier editorial and producing work including the popular documentaries WORDPLAY, FREAKONOMICS, OUTRAGE, THESE AMAZING SHADOWS, RICH HILL and SUPERHEROES.

Doug is the producer, cinematographer and supervising editor of THE S WORD, a new award-winning film on suicide survivors turned activists directed by his wife Lisa Klein, now playing across the US and Canada. His earlier film OF TWO MINDS, co-directed with Lisa, is an intimate look at three remarkable people living with bipolar disorder, and is winner of both the 2013 EIC Prism and SAHMSA Voice Awards for excellence in films on mental health issues.  The film was a popular documentary on Netflix and at national film festivals.

Doug co-owns MadPix Films, a production and post production company in Los Angeles dedicated to documentary and independent films. He is also a longtime film educator with classes and seminars at USC, Syracuse University, Northwestern University and the YoungArts Foundation in Miami, as well as exchanges and panels in Indonesia, Brazil, New Zealand, Armenia, Malaysia, Nigeria, China, the Netherlands and more.

Parking at the University of Southern California is limited throughout the fall semester, and it is best to visit the USC Transportation Website for the most up-to-date information if you plan to drive and park on campus: