The European Parliament Liaison Office in Washington, D.C. and Outside the Box [Office]
invite you to virtually attend Links will be available to watch on Festival Scope from June 7th - 16th
and will be sent to the RSVP list on June 7th.

Links will be geo-blocked to the United States only. 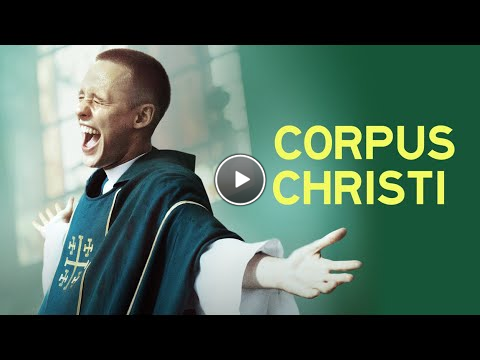 After spending years in a Warsaw prison for a violent crime, 20-year-old Daniel is released and sent to a remote village to work as a manual laborer. The job is designed to keep the ex-con busy, but Daniel has a higher calling. Over the course of his incarceration he has found Christ, and aspires to join the clergy - but his criminal record means no seminary will accept him. When Daniel arrives in town, one quick lie allows him to be mistaken for the town’s new priest, and he sets about leading his newfound flock. Though he has no training, his passion and charisma inspire the community. At the same time, his unconventional sermons and unpriestly behavior raise suspicions among some of the townsfolk - even more so as he edges towards a dark secret that the community hasn't revealed in the confessional booth.

Born in 1974 in Bialystok, Poland, Tomasz Frankowski is a former Polish national soccer player. He played in several soccer clubs such as Jagiellonia Bialystok, Wisla Kraków, RC de Strasbourg, Potiers, Martigues, Elche, Nagoya Grampus Eight, Wolverhampton Wanderers, CD Tenerife and a with the US soccer team Chicago Fire in 2008. He is the third most successful goal scorer in Polish soccer league history. After his successful soccer career, he became a member of the Civic Platform, political party in Poland. Following his election to the European Parliament in 2019, he is a member of the Committee on Culture and Education and the Committee on Transport and Tourism. He is also a co-Chair of the Sports Group in the European Parliament.

The LUX Audience Award, just as the LUX prize, is a quality indicator for backing European film productions. The initiative gives the nominated films more visibility and helps them cross borders and reach a wider audience.

Learn more about the LUX AUDIENCE AWARD at: https://luxaward.eu/en/lux-audience-award

A Note about Festival Scope

The Festival Scope system will geo-block the screenings in the United States through IP addresses.

In order to access the screening, users will have to register at: https://www.festivalscope.com/signup.html

Here's a more precise guide on the whole process: https://www.festivalscope.com/page/step-by-step-on-festival-scope/