Outside the Box [Office] and Shudder invite you to attend We will screen The Power (93 minutes) live during the webinar. 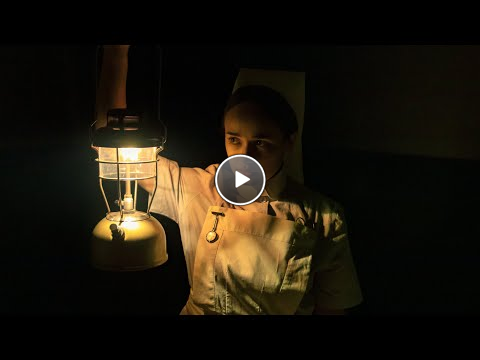 London, 1974. As Britain prepares for electrical blackouts to sweep across the country, trainee nurse Val (Rose Williams) arrives for her first day at the crumbling East London Royal Infirmary. With most of the patients and staff evacuated to another hospital, Val is forced to work the night shift, finding herself in a dark, near empty building. Within these walls lies a deadly secret, forcing Val to face both her own traumatic past and deepest fears in order to confront the malevolent force that’s intent on destroying everything around her.

Corinna Faith is a writer/director working across TV and film. She began work as a film camera assistant, before moving into directing factual television. After ten years in that role, she started making short dramas including Thai Bride, a ghost story, and Care, which was Bafta nominated. Corinna has recently written for Netflix, New Pictures and World TV. The Power, financed by the BFI and Head Gear, is her first feature length film.

In 2019 Rose Williams was announced as one of Screen International’s Screen stars of Tomorrow securing herself as one to watch within the industry. She is a bright and raw British talent who trained at art school prior to working in select artistic fields including fashion and costume design.

2019 saw Rose star play the leading role as ‘Charlotte Heywood’ in ITV’s new drama series Sanditon. The series is based on Jane Austen’s final and incomplete novel of the same name. The eight-part sumptuous drama is adapted by Emmy and BAFTA-winning screenwriter Andrew Davies (War & Peace, Les Misérables, Pride and Prejudice). Rose also starred alongside a stellar cast including Theo James and Anne Reid. Written only months before Austen’s death, Sanditon tells the story of the joyously impulsive, spirited and unconventional ‘Charlotte Heywood’ (Williams) and her spiky relationship with charming, humorous and slightly wild ‘Sidney Parker’ (James). A chance accident transports ‘Charlotte’ from her hometown to the coastal resort of Sanditon. The series aired on ITV1 in the UK and PBS Masterpiece in the US.

Rose was also seen in Seth Green’s directorial debut feature Changeland. Starring alongside Macaulay Culkin, Brenda Song and Kedar Williams-Stirling the film centres on ‘Brandon’ (Seth Green) who purchased an exotic honeymoon package only to discover his wife is having an affair. Instead of canceling the trip ‘Brandon’ takes his best friend ‘Dan’ (Breckin Meyer) on the trip to Thailand. The pair soon meet a range of personalities including honeymooners ‘Emma’ (Williams) and ‘Marc’ (Williams Stirling), tour guide ‘Pen’ (Song) and have an adventure with ‘Ian’ (Culkin) a tour operator looking for a good time.

Other television credits include The CW’s Reign in which Rose played ‘Claude de Valois’ from season 2-4. The series follows the early exploits of ‘Mary’ Queen of Scots. The series concluded in 2017 after four seasons. Rose also starred in Medici as ‘Caterina Sforza Riario’ a political family drama set in Florence in the early 15th century.

While I was writing the script, I read a good description of what a ghost story classically is; a disturbed spirit has an issue that a protagonist, usually female, needs to understand and solve. Then the spirit can rest in peace. This description resonated with me. I was already telling the story from a female point of view, and wanted the female experience to inform the horror elements. But I was writing during the explosion of resistance to silence and passivity that came with the Me Too movement. And it felt like the landscape was changing to some extent. The idea that an angry spirit could neatly be put to rest, made quiet at the end of a story, felt plain wrong. This gave me an interesting trajectory.

I realized while we were filming that we were telling a story about the silence of girls. Voices made quiet. Then I realized, that without planning, I was telling the story of my journey to that moment too. It had taken many years, and changes in my own confidence and the confidence of the industry to get there. To allow my own voice to speak. Like the restless spirit, I’ve no intention of laying it to rest now.