We will screen Another Round (117 minutes) live during the webinar. 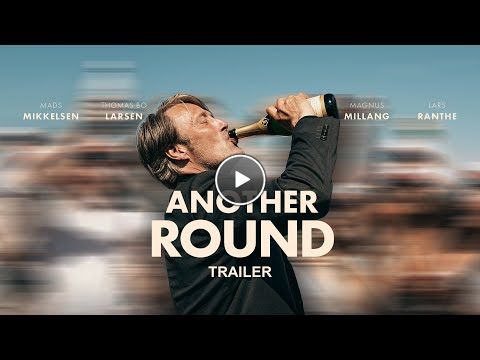 Underscored by delicate and affecting camerawork, director Thomas Vinterberg's spry script, co-written with regular collaborator Tobias Lindholm, uses this bold premise to explore the euphoria and pain of an unbridled life. Playing a once brilliant but now world-weary shell of a man, the ever surprising Mads Mikkelsen delivers a fierce and touching performance.

"I never drink before breakfast."

The quote is from Churchill, who helped to defeat the Germans and win World War II, while under the excessive and constant influence of alcohol.

Other great thinkers, artists and writers, such as: Tchaikovsky and Hemmingway have found courage and inspiration that way. After the first mouthfuls of alcohol, we all know the feeling of the conversation growing, the room getting bigger and the problems getting smaller.

With this movie, we want to examine and salute alcohol’s ability to set people free. The film is inspired by the Norwegian psychologist Finn Skårderud’s theories that man is born with a 0.5 blood alcohol level shortfall.

We want to create a tribute to alcohol but it goes without saying we also want to paint a nuanced picture. Embedded in our examination of the essence of alcohol lies an acknowledgement that people die from - and are destroyed by - excessive drinking. An existence with alcohol generates life, but it also kills.

In this story, we meet four good men a little late in their lives. We meet them in a world we know: a boring and mediocre one, which sees them locked in monotony and entrenched in patterns and habits, trapping them in middle ground. At the same time, death is moving closer. They have passed the half-way point in their expected lifetime. The freedom of youth, infatuations and weightlessness have gradually become distant memories. They rediscover all of it and much more by taking part in an experiment entailing a systematic intake of alcohol. Initially, in connection with their jobs as high school teachers.

The movie is imagined to be rooted in the real world – in completely naked, blunt and at times improvised intimacy – like in "A War" by Tobias Lindholm, "The Celebration" by the undersigned and "Husbands" by Cassavetes. The moments play out, letting the camera observe and not dictate.

The movie assumes a humoristic and – in some eyes – scandalous approach to a serious topic. ANOTHER ROUND is intended to be a multi-faceted story that at the same time provokes and entertains, makes us think, cry and laugh within the length of the movie. And hopefully leaves food for thought and debate for an audience who lives in a world which, to an increasing degree, is defined by puritanical rhetoric outwardly, but has a rather high alcohol intake even from a relatively young age.

ANOTHER ROUND is imagined as a tribute to life. As a reclaiming of the irrational wisdom that casts off all anxious common sense and looks down into the very delight of lust for life… although often with deadly consequences.

Thomas Vinterberg is one of Denmark's most important, award-winning, and internationally celebrated directors. His latest effort was the large-scale, international drama Kursk (2019), about the Russian submarine tragedy in the year 2000. Another recent success of his, The Commune (2016), was selected for the main competition at the Berlin Film Festival and netted Trine Dyrholm, a Silver Bear for Best Actress. In 2012, Thomas Vinterberg won worldwide acclaim for this Oscar and Golden Globe-nominated drama The Hunt (2013), which also won Mads Mikkelsen the Award for Best Actor at the prestigious Cannes Film Festival. Other notable works include the adaptation of the Thomas Hardy novel Far from the Madding Crowd (2015), with Matthias Schoenaerts and Carey Mulligan; Dear Wendy (2005); and It's All About Love (2003). Vinterberg got his international breakthrough in 1998 with Festen – the world's first Dogme 95-film, which received several international awards, including the Cannes Jury Prize. Thomas Vinterberg made his feature debut with The Biggest Heroes (1996), after graduating from the National Film School of Denmark in 1993.