A Live Q&A about the Peacock Original 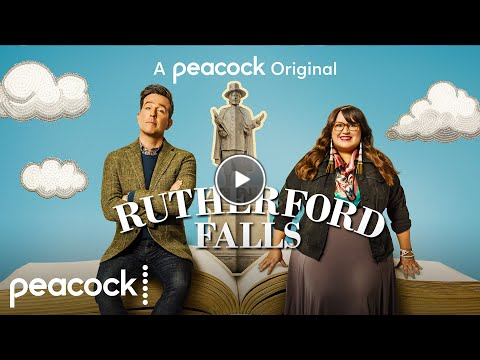 A comedy about two lifelong best friends, Nathan Rutherford (Ed Helms) and Reagan Wells (Jana Schmieding), who find themselves at a crossroads – quite literally – when their sleepy town gets an unexpected wakeup call. From co-creators and executive producers, Michael Schur (Parks and Recreation, The Good Place), Ed Helms, and Sierra Teller Ornelas (Brooklyn Nine-Nine and Superstore). Sierra Ornelas is a Navajo and Mexican American creator, writer, producer and showrunner and has become a comedic force to be reckoned within the industry.

Sierra is the co-creator, showrunner, writer and executive producer of the new Peacock comedy series, RUTHERFORD FALLS. She is reuniting with Michael Schur to create the show alongside Ed Helms. She has had a successful writing career as a Co-Executive Producer on NBC’s SUPERSTORE as well as a Co-Executive Producer on ABC’s SPLITTING UP TOGETHER. Previously, she was a Producer on BROOKLYN NINE-NINE for FOX. She was also a Co-Producer on SELFIE for ABC, an Executive Story Editor on FOX’s SURVIVING JACK and a Story Editor on HAPPY ENDINGS for ABC.

RUTHERFORD FALLS is set in a small town in upstate New York and follows two lifelong best friends, Nathan Rutherford (Ed Helms) and Reagan Wells (Jana Schmieding), who find themselves at a crossroads–quite literally–when their sleepy town gets an unexpected wakeup call. Nathan is a descendant of the town’s founder who takes pride in his family’s history; and Reagan a member of the Minishonka Nation, who has dreams of championing her own history. From there, things get wonderfully complicated. An announcement on the show’s premiere date is forthcoming. The series arrives this Spring on Peacock.

In bringing RUTHERFORD FALLS to life, it was essential for Sierra that the series not only accurately portray Native American people but also tap into their rich, often-unheralded comedy legacy, and shine a light on fresh and relevant Native comedy voices. The intention is to show Native Americans—through a mainstream comedy—as funny and real people with relatable, complex stories to tell; and in doing so, give indigenous actors the opportunity to shine, as the show so brilliantly does. Sierra also made it a priority to ensure that the representation she’s forging onscreen also be reflected off-screen, which meant building a writers’ room staffed with multiple Native writers, all of whom bring different points of view and comic sensibilities to the table. The result is a multidimensional view of indigenous culture very rarely seen on television today, and especially in comedies. Jana Schmieding is a true multihyphenate star on the rise, who is making her mark on the entertainment industry as an actor, writer, comedian, and content creator. A Lakota Sioux Native, Jana has been a longtime educator and advocate, raising awareness around Native issues and bringing Native stories to mainstream audiences.

Jana will next star as the female lead opposite Ed Helms on Mike Schur’s new comedy series, RUTHERFORD FALLS. She also serves as a staff writer on the series, which will launch on Peacock in 2021. The first Native comedy of its kind, the series will explore themes of identity, friendship, and how we define ourselves and relate to historical narratives. Jana was heavily involved in all aspects of the show – including down to the details of beading items for the costume, props and marketing departments.

A graduate of the University of Oregon, Jana has performed and directed improv, sketch and solo comedy for over a decade in both New York and Los Angeles. One of her pilots brought her to The NYTV Festival as a Notable Writer. In addition to being passionate about Native visibility, she has also been a vocal advocate for social justice issues, namely body justice – all of which she discusses regularly in her comedy and writing. Jana hosted the acclaimed “Woman of Size” podcast from 2017-2019, where she and guests discussed the way we think and talk about our bodies.

Kapena Baptista is a composer, ethnomusicologist, and indigenous advocate from Los Angeles. He graduated cum laude in Music and Anthropology from Harvard University where he served as Assistant Principal Bassoon in the Harvard-Radcliffe Orchestra, and was an undergraduate composer in both the Harvard College Composers Association and the Harvard University Studio for Electroacoustic Composition. Kapena’s academic focus was on his own musical lineage from his Native Hawaiian background. His senior thesis “Lovely Hula Hands: Native Hawaiian Identity in Hapa Haole Music and Hula Performance” contextualized Hawaiian music and Hula dancers within the development of the Hawaiian tourist industry and was awarded a Thomas T. Hoopes Prize for outstanding scholarly research. After graduating from Harvard in 2016, Kapena was named an inaugural Generation-Indigenous Fellow through the Center for Native American Youth, and was awarded a Fulbright Scholarship to study and teach in Lisbon, Portugal. Kapena is now an MFA candidate in the Peter Stark Producing Program where he is both a Norman Topping Graduate Fellow and a Shriram Family Graduate Fellow. He hopes to increase Native American and Indigenous representation in the media by highlighting narratives that seek to modernize, empower, and uplift the peoples whose ancestral lands we call home.

The Festival is an initiative of the Native American non-profit the Barcid Foundation and aims to showcase the rising talent in Native American filmmaking. This year the LA SKINS FEST is expanding the screening series to accommodate the growing talent in Indian Country.

The prestigious LA SKINS FEST ranks among the country’s best film festivals and is an annual gathering for film industry insiders, cinema enthusiasts, filmmakers, and critics. The LA Skins Fest is considered a major launching ground for Indian Country’s most talked about films. Founded in 2007, the Los Angeles Skins Fest, presented in the historic TCL Chinese Theatre in Hollywood, is a 6-day multicultural event celebrating the art of film, TV and new media. The Los Angeles Skins Fest’s long-standing commitment is to join filmmakers and film connoisseurs together to experience great cinema. The exciting schedule consists of dozens of filmmakers presenting their newest works, special artist development programs, tributes to community leaders, special events, and remarkable films. Festival headquarters are in Los Angeles, CA.

About the SCA Council on Diversity & Inclusion

Diversity, inclusion and respect of differences, including race and ethnicity, gender and gender identities, sexual orientation, and disability, are foundational tenets of the USC School of Cinematic Arts (SCA). SCA is an internationally recognized institution and a leader in the fields of cinematic arts, games, emergent media forms and media scholarship. While entertainment industries including film, television and interactive media have deep histories in progressive social politics, current cultural discussions about the state of mainstream media industries indicate that much work needs to be done to challenge and change existing paradigms around power, privilege and inclusion. Recognized as a pipeline to the media industries and graduate media programs, SCA is uniquely positioned to play a leadership role in preparing the next generation of media producers and scholars to critically engage with issues of diversity and build inclusive creative and scholarly communities within media industries and academia. SCA embraces this opportunity to influence the wider community of media creators and scholars. In 2016 SCA formed the Council for Diversity & Inclusion to address how our community can foster a more inclusive environment.

USC is located in one of our nation’s most vibrant and diverse cities, and we recognize the need for our institution to reflect the complex and multifaceted richness of our surrounding communities in terms of students, staff, faculty and community partners. SCA is committed to cultivating a diverse and inclusive learning environment at all institutional levels. We promote diversity and inclusion in the recruitment and training of all faculty members and believe that celebrating diversity within our student population will open critical and constructive dialogues about difference that enhance our creative and scholarly work. We also understand that support staff play a vital role in the SCA community and, therefore, the same attention needs to be paid to diversity among staff members. We define diversity to include age, race, ethnicity, physical ability, gender identity, gender expression, sexual orientation, socioeconomic status, country of origin, veteran status, religious practice, and political ideology. SCA seeks to weave a philosophy of inclusion and respect for difference into the fabric of our community; take a leadership role in areas of diversity and inclusion across the university; and establish a model for media industries to empower different voices and perspectives.