THE FAITHFUL: THE KING, THE POPE, THE PRINCESS -- A Live Screening and Q&A with Writer/Director/Producer Annie Berman and Photographer Ralph Burns

THE FAITHFUL:
The King, The Pope, The Princess We will screen The Faithful: The King, The Pope, The Princess (90 minutes) live during the webinar.

About The Faithful: The King, The Pope, The Princess 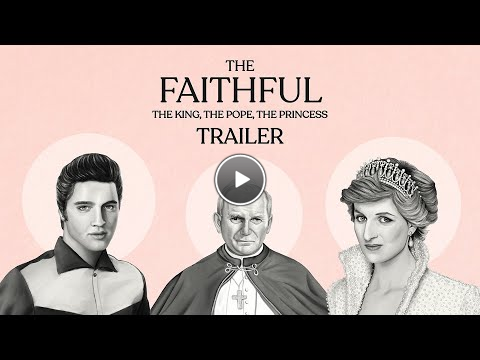 A Pope John Paul II lollipop. An Elvis Presley shower curtain. A Princess Diana teacup. These are just some of the countless pieces of memorabilia that these pop culture icons’ most devoted fans collect and cherish – but why? The Faithful‘s director, Annie Berman, explores the deep veneration and legacies of the Pope, the Princess, and the King. Over the course of 20 years, Berman profiles these figures’ biggest fans and makes numerous pilgrimages to Vatican City, Graceland, and Kensington Palace. As the years go by, the film itself becomes increasingly entwined with Berman’s daily life and identity, much like how these officially-licensed knick-knacks define the fans she filmed. Annie Berman is a media artist living and working in New York City. Named one of Independent Magazine’s 10 Filmmakers to Watch in 2016, her films, videos, performances, and installations have shown internationally in galleries, festivals, universities, and conferences, including the MoMA Documentary Fortnight, Rooftop Films, Galerie Patrick Ebensperger Berlin, Kassel Hauptbahnhof, Spring / Break Art Show, Flux Factory, Babycastles Gallery, and the Rome Independent Film Festival where she was awarded the Best Experimental Film Prize. Her work has received support from the Puffin Foundation, Wave Farm, the Leonard Bernstein Festival of the Arts, the Center for Independent Documentary, Signal Culture, The Rockefeller Brothers Fund, and UnionDocs. She holds an MFA in Integrated Media Art from Hunter College.

Ralph Burns, a Western North Carolina based photographer originally from South Louisiana, is widely recognized for his black-and-white documentary style photographs, taken mostly in the classic 35 mm style, and then printed by his own hand. Burns has photographed extensively across the American South, as well as in Armenia, Mexico, Cuba, Israel, India and Thailand. Throughout his career Burns has displayed a continuous and persistent interest in the deeper underpinnings of culture and religion, attempting to explore the deeper human motivations for cultural adherence and religious allegiance, while maintaining a compassionate and mainly non-judgmental intimacy with his subjects and their beliefs. Burns’ work is recognized both nationally and internationally, his photographs having been exhibited in museums worldwide.