USC Comedy at the School of Cinematic Arts,
USC Visions and Voices: The Arts and Humanities Initiative,
and Netflix, invite you to attend

Live Q&A with the Creators of the Netflix Original Series 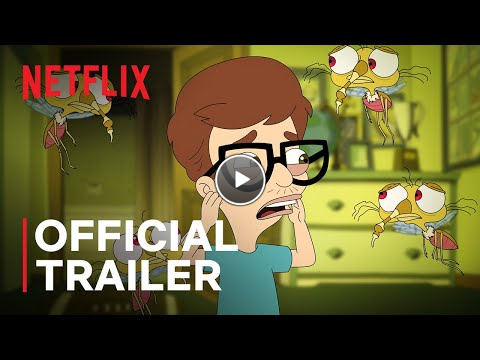 Big Mouth is a half-hour edgy adult animated comedy from real-life best friends Nick Kroll and Andrew Goldberg about the glorious nightmare that is teenage puberty. Comedian John Mulaney lends his voice to the character of Andrew, while Kroll (who serves as co-creator, executive producer) voices many including best friend Nick. Maya Rudolph, Jason Mantzoukas, Jordan Peele, Fred Armisen, Jenny Slate and Jessi Klein are among those who lend their voice to the series. Nick Kroll, Andrew Goldberg and screenwriter-directors Mark Levin & Jennifer Flackett are all creators and executive producers on the series. Big Mouth is a Netflix production.

Season 4 of Big Mouth focuses on anxiety; the anxiety of growing up, of figuring out who you are, discovering yourself, accepting yourself. The season starts at summer camp before our gang heads to 8th grade. Maria Bamford descends as Tito the Mosquito, the anxiety ridden insect who targets all our favorite kids. As the season progresses, we meet Zach Galifianakis' Gratitoad, who is there to help our crew cope with their anxiety and not let it completely own them. In the great Big Mouth tradition, the show continues to explore human sexuality and everything around it, including racial and sexual identity, love in all its forms, and having "The Hugest Period Ever." Netflix recently ordered HUMAN RESOURCES, a workplace comedy set in the world of the monsters from BIG MOUTH, co-created by Goldberg with Nick Kroll, Mark Levin, Jennifer Flackett, and Kelly Galuska. Along with Kroll, Levin, and Flackett, Goldberg founded the production company BRUTUS PINK which produces animation exclusively for Netflix.

Goldberg began his career writing for FAMILY GUY where he rose to the level of Co-Executive Producer. He lives in Los Angeles with his wife and two children.

Mark Levin & Jennifer Flackett have been screenwriters, producers and directors in both television and film for twenty-five years. Netflix’s BIG MOUTH, which they co-created and executive produce, premiered its fourth season on Netflix in December 2020. Netflix recently ordered HUMAN RESOURCES, a workplace comedy set in the world of the monsters from BIG MOUTH, co-created with Nick Kroll, Andrew Goldberg and Kelly Galuska.

In film, Levin & Flackett’s wrote MADELINE, WIMBLEDON, THE PERFECT STORM, and JOURNEY TO THE CENTER OF THE EARTH 3-D. Their Blacklisted script THE ADAM PROJECT has just wrapped production with Netflix and Skydance, and it stars Ryan Reynolds, Jennifer Garner and Mark Ruffalo. Together, they wrote and directed the films LITTLE MANHATTAN and NIM’S ISLAND.

Kelly Galuska is the co-creator and showrunner for Netflix's HUMAN RESOURCES, an animated workplace comedy set in the world of the monsters from BIG MOUTH, co-created with Andrew Goldberg, Nick Kroll, Mark Levin and Jennifer Flackett.

Previously, Kelly has written on staff on MOM on CBS, as a freelancer on ARCHER on FX, and on BOJACK HORSEMAN on Netflix, for which she was nominated for a Writers Guild Award. She has been a writer on Emmy nominated BIG MOUTH on Netflix since season one, where she rose to the level of Co-Executive Producer.

Galuska was part of the first class of the Humanitas New Voices program, and has developed pilots with CBS, Sony, IFC and FX.

J.D. Connor is an Associate Professor in the Division of Cinema and Media Studies and received his PhD in from the Humanities Center at Johns Hopkins University. Prior to joining USC in 2016, he was on the Art History and Film & Media Studies faculties at Yale and the Visual & Environmental Studies and English faculties at Harvard. His research and teaching focus on the art and industry of contemporary Hollywood. He is the author of Hollywood Math and Aftermath: The Economic Image and the Digital Recession and The Studios after the Studios: Neoclassical Hollywood, 1970–2010.

Other work has been published in journals such as Jump Cut, Media Industries, The Journal of Visual Culture, Media Fields, FlowTV, and the Los Angeles Review of Books. His work has also appeared in edited volumes that include Reading Capitalist Realism, Film and the American Presidency, and the volumes on Directing and Art Direction and Production Design in the Behind the Silver Screen series. He is working on a history of tape recording, Archives of the Ambient; an exploration of contemporary comedy, Comedy Equals Comedy Plus Time; and a study of the theory and practice of cinematic worldbuilding.  He is a founding member of Post•45 (post45.org), a collective of scholars of American literature and culture. At USC, he is an organizer of the Sound Studies Working Group. He tweets @jdconnor and his website is johnconnorlikeintheterminator.com