THE BIRD WITH THE CRYSTAL PLUMAGE: A Live Screening of Dario Argento's Debut 'Giallo' Thriller

Outside the Box [Office], Arrow Films, the American Genre Film Archive (AGFA),
and Fangoria's Colors of the Dark Podcast, Present

THE BIRD WITH THE CRYSTAL PLUMAGE Followed by a Live Discussion with Dr. Rebekah McKendry & Elric Kane
Hosts of Fangoria's Colors of the Dark Podcast The screening of The Bird with the Crystal Plumage (98 minutes) will be shared directly in the Webinar.

About The Bird with the Crystal Plumage (1970) 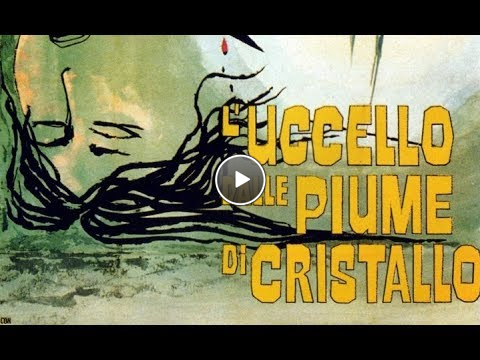 Sam (Tony Musante, WE OWN THE NIGHT) is an American writer living in Rome, and witnesses a brutal attack on a woman (Eva Renzi, FUNERAL IN BERLIN) in a modern art gallery. Powerless to help, he grows increasingly obsessed with the incident. Convinced he saw something that night which holds the key to identifying the maniac terrorizing Rome, Sam launches his own investigation parallel to that of the police, heedless of the danger to him and his girlfriend (Suzy Kendall, SPASMO.)

A staggeringly assured first feature, CRYSTAL PLUMAGE establishes the key traits that defines Argento’s filmography, including lavish visuals and a flare for wildly inventive / brutal scenes of violence. With sumptuous cinematography by Vittorio Storaro (APOCALYPSE NOW) and a seductive Ennio Morricone score, this landmark film has never looked or sounded better in this new, 4K-restored edition.

Rebekah McKendry, PhD, is a writer, director, and academic specializing in horror and science fiction. She earned her PhD in Media Studies with a focus on Horror from Virginia Commonwealth University. She also holds an MA in Film Studies and a second MA in Education. She is currently a Professor in USC’s School of Cinematic Arts where she teaches genre film, directing, and production.

McKendry began her career in film development and production at Fangoria Entertainment where she worked for over fifteen years before becoming Editor-in-Chief at Blumhouse Productions. In 2018, McKendry wrote and directed her feature debut All the Creatures Were Stirring starring Constance Wu and has since gone on to direct several more features and TV shows. She hosted the award-winning podcast SHOCK WAVES for Blumhouse Productions and currently hosts the COLORS OF THE DARK Podcast for Fangoria Entertainment. Rebekah also founded and runs a scholarship for female film students interested in pursuing work in horror cinema called the Stephanie Rothman Fellowship for Female Film Students.

Elric Kane is a co-host of the Fangoria podcast ‘Colors of the Dark’ as well as the New Beverly Cinemas ‘Pure Cinema’ podcast. Prior to this he hosted the podcasts Shock Waves, Killer POV and was the producer of the live streaming video show ‘Inside Horror’. In addition to the podcasts Kane is an Independent filmmaker, the Chair of Film at Hussian College Los Angeles and former owner of the cult movie hang out the ‘Jumpcut Cafe’. He also played Lizardman in the straight to video film Lizardman but that’s a long story…

About Fangoria's Colors of the Dark Podcast

FANGORIA has teamed up with some of the leading horror genre experts to bring you COLORS OF THE DARK. Join hosts Dr. Rebekah McKendry (professor, Fangoria, writer-director) and Elric Kane (professor, Pure Cinema Podcast, filmmaker) as they take a deep look at the horror genre. Each show explores a specific part of horror history, key players, franchises, deep cut titles, important films, and interviews with some of the genres’ biggest icons. COLORS OF THE DARK PODCAST is presented by the FANGORIA Podcast Network. Arrow Films is a leading independent entertainment distribution company, established in 1991. Operating in the UK, the Republic of Ireland, United States of America and Canada, Arrow Films is dedicated to supporting upcoming and established filmmakers of dynamic new cinema and developing an enviable slate of quality films that enjoy a lasting legacy across its award-winning branded labels, channels, and platforms.

Arrow Films is also a leading restorer and theatrical distributor of classic and cult/horror films, including landmark titles such as Cinema Paradiso (25th-anniversary re-issue), Donnie Darko (15th-anniversary re-issue) and Hellraiser (30th Anniversary re-issue). These lovingly restored films are brought back into cinemas nationwide with brand new-look campaigns with wide-reaching distribution including outdoor event-status screenings at various cultural festivals, and as one-off bookings in local repertory cinemas and film-societies.

Arrow Films is widely considered to be the global market leader in the Premium Home Entertainment market, fuelled by passionate and expert curation, aligned with state of the art in-house film restoration - resulting in highly sought after bespoke Blu-ray editions of classic, cult and horror films, across its Arrow Video and Arrow Academy branded labels. Beloved by collectors, these ever-expanding brands continue to delight their growing international fan base with regular interactive live events, festival sponsorship and retail stand presence. Our offering extends to truly Limited Edition box sets as well as associated spin-off products, now including books and vinyl records.