Followed by a Q&A with Creators
Dave Burd and Jeff Schaffer.

DAVE premieres with two back-to-back episodes on
March 4 at 10:00 pm on FXX and next day on FX on Hulu. 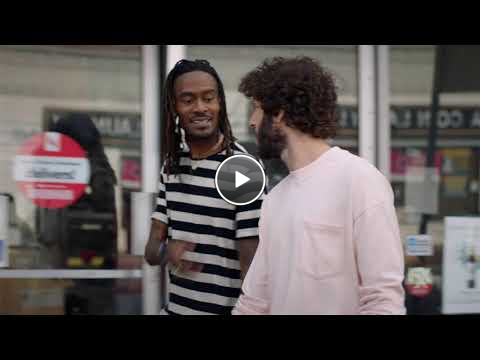 Based on the life of Dave Burd, aka chart-topping rapper and comedian Lil Dicky, DAVE is centered on a neurotic man in his late twenties who has convinced himself that he's destined to be one of the best rappers of all time. Now he must convince his closest friends, because with their help, he actually might convince the world.

The series comes from an impressive creative team led by co-creators Jeff Schaffer (Curb Your Enthusiasm) and Dave Burd, and in addition to Schaffer and Burd, is executive produced by Saladin Patterson (The Big Bang Theory), Kevin Hart (Jumanji: Welcome to the Jungle), Greg Mottola (Superbad), Scooter Braun (Scorpion) and more. The series is produced by FX Productions.

ABOUT EPISODE 1: The Gander

Dave meets GaTa for the first time and gets educated on the social dynamics of the rap world. Under GaTa’s tutelage, Dave tries to score a feature verse from YG.

Dave Burd, known by his stage name Lil Dicky, is an American rapper and comedian. He came to prominence with the release of the music video for his song “Ex-Boyfriend,” which went viral on YouTube with more than one million views in 24 hours. In 2015, Lil Dicky released his debut album Professional Rapper, which featured collaborations with artists including Snoop Dogg, Fetty Wap, Rich Homie Quan, T-Pain and Brendon Urie. In 2018, Lil Dicky released his hit single “Freaky Friday,” which has over 581 million streams on YouTube and 1.5 billion global streams. In April, Lil Dicky premiered his single and video “Earth,” which features over 30 artists including Justin Bieber, Sia, Ariana Grande, Katy Perry, Ed Sheeran and Kevin Hart. The video racked up 11 million views in its first 24 hours, resulting in over 500,000 signatures on the Global Deal for Nature petition.

Jeff Schaffer doesn’t want to talk about all the work he’s done. Don’t get him wrong, he wants you to know about it and he really wants the adulation, but he doesn’t want to have to tell you himself and seem like a braggart. Schaffer would love you to know that he’s spent a large portion of his adult life working with Larry David, writing and then producing four seasons of Seinfeld with his partner Alec Berg, eventually helping to run the show until it was cruelly cancelled. And he wants you to hear all about how he has worked on Curb Your Enthusiasm since season five as a writer, director and executive producer. But he can’t tell you any of this. How cheesy do you think he is?

Schaffer’s also worked on movies that he would love to be commended for, including Eurotrip, Clear History and traveling around the world with Sacha Baron Cohen writing and producing Bruno and The Dictator. These are the highlights. Lowlights are available upon request. And of course, Schaffer wants you to know that he and his wife Jackie created and ran the show The League for seven seasons. But he can’t just come right out and say it. That would smack of desperation. Though his schedule has been hectic, Schaffer has still found the time to regret this bio. He thinks the third person angle is bullshit and he sounds a bit full of himself.