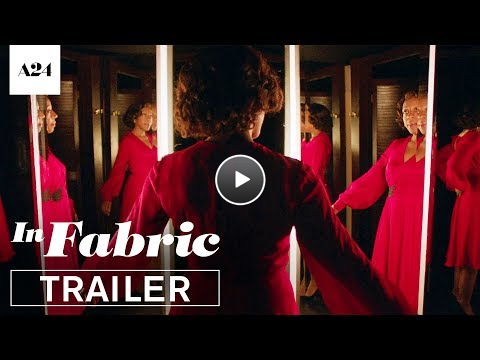 A lonely woman (Marianne Jean-Baptiste), recently separated from her husband, visits a bewitching London department store in search of a dress that will transform her life. She’s fitted with a perfectly flattering, artery-red gown—which, in time, will come to unleash a malevolent curse and unstoppable evil, threatening everyone who comes into its path.

From acclaimed horror director Peter Strickland (the singular auteur behind the sumptuous sadomasochistic romance The Duke of Burgundy and auditory giallo-homage Berberian Sound Studio) comes a truly nightmarish film, at turns frightening, seductive, and darkly humorous. Channeling voyeuristic fantasies of high fashion and bloodshed, In Fabric is Strickland’s most twisted and brilliantly original vision yet.

She will next be seen starring in Netflix’s upcoming musical drama series SOUNDTRACK. Prior to this, Marianne played a tormented mother in Sam Esmail’s highly regarded Amazon series, HOMECOMING, opposite Julia Roberts; and also, recently starred in the Sony live-action/animated film of the Beatrix Potter classic PETER RABBIT, opposite James Corden and Margot Robbie.

On television, Marianne was seen as ‘LAPD Deputy Chief Joy Lockhart’ in CBS’s TRAINING DAY, as ‘Virginia Cross’ in ABC’s HOW TO GET AWAY WITH MURDER and as FBI Director ‘Bethany Mayfair’ on the first season of NBC’s hit show BLINDSPOT. She was also featured in Season 2 of the hit ITV drama BROADCHURCH playing ‘Sharon Bishop,’ a role written especially for her by the show’s writer and creator, Chris Chibnall.  For seven years Marianne portrayed 'Vivian Johnson' on WITHOUT A TRACE (CBS). She and her castmates were nominated for the SAG Award for Best Ensemble in a Drama Series in 2004, and she was nominated for a NAACP Award for Outstanding Supporting Actress in a Drama Series three years in a row. Other television credits include HARRY’S LAW (NBC),  SONS OF ANARCHY (FX), THE MURDER OF STEPHEN LAWRENCE (PBS), THE MAN (BBC) and Oprah Winfrey’s miniseries THE WEDDING (ABC).

A writer and composer, she wrote the score for Mike Leigh's feature film CAREER GIRLS. She has written and performed with British jazz musicians, including Jason Rebello, for whom she wrote and recorded four tracks on his album "Keeping Time."A graduate of the Royal Academy of Dramatic Art, Marianne’s theatre credits include Hang (Royal Court), The Way of the World, Measure for Measure (Royal National Theatre), The Winter’s Tale and The Merchant of Venice (Shakespeare in the Park) opposite Al Pacino.

She made her directorial debut with the short film INK, which she also penned.