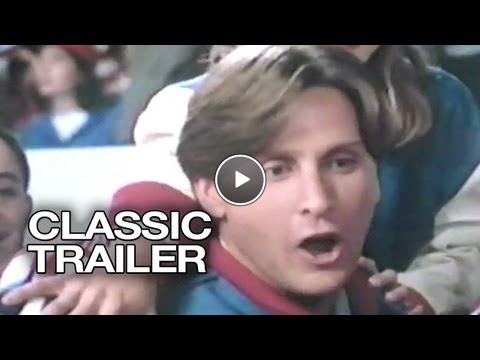 The Mighty Ducks are thrilled to be chosen to compete in the Junior Goodwill Games as Team USA. They'll be facing off against the best teams from all over the world -- including the meanest team that ever sliced up the ice! Are they out of their league? Has Coach Bombay (Emilio Estevez) let the big time go to his head, forgetting that it's just a game? But when a street hockey gang teaches the Ducks to get tough, the Coach remembers how to have fun ... and the Ducks show the world the true meaning of Duck Power!

A native of Utica, New York, Steven Brill studied film, theater and acting at Boston University. It was there that he became a student of acclaimed, Nobel Prize winning poet and playwright, Derek Walcott. Brill became a part of Mr. Walcott’s first theater group in Boston, Playwright’s Theater, where he wrote and directed original plays.

Brill continued to write plays and moved to Los Angeles where he began auditioning as an actor and writing screenplays as well. In his spare time, Brill would go skating at public ice rinks - which proved a fortuitous hobby. One day while watching a Pee Wee hockey practice, he was struck by the idea for THE MIGHTY DUCKS. Brill scripted the film, recalling his own youth hockey experience, and sold it to Walt Disney Pictures. Emilio Estevez was cast as Coach Gordon Bombay in the 1992 release. One year later, The Mighty Ducks of Anaheim entered their first NHL season. Brill next wrote and executive produced the 1995 sequel D2: THE MIGHTY DUCKS and in 1997, D3: THE MIGHTY DUCKS.

Brill's directorial debut was the Disney film HEAVYWEIGHTS, a comedy about a group of kids at a weight loss summer camp starring Ben Stiller. He co-wrote the script with Judd Apatow, who also served as the executive producer. Next, Brill wrote and directed LATE LAST NIGHT for Screenland Pictures. LATE LAST NIGHT stars Emilio Estevez, Steven Weber and Catherine O’Hara. It chronicles one intense night in the life of a man in Los Angeles.

Brill wrote READY TO RUMBLE for Warner Brothers. He also worked as a writer on THE WEDDING SINGER, BIG DADDY, and DOCTOR DOLITTLE. He then directed and co-wrote LITTLE NICKY, with Adam Sandler for New Line Cinema. Also starring in the picture are Harvey Keitel, Patricia Arquette and Reese Witherspoon. Brill followed that up by directing MR. DEEDS with Adam Sandler, also starring Winona Ryder, which came out in June of 2002 and made over 170 million at the box office worldwide.

Brill then re-wrote and directed WITHOUT A PADDLE, starring Burt Reynolds, Seth Green and Matthew Lillard, for Paramount Pictures. He directed DRILLBIT TAYLOR produced by Judd Apatow and starring Owen Wilson for Paramount Pictures. In 2012 he made WALK OF SHAME, an original screenplay that he directed, starring Elizabeth Banks, for Lakeshore Entertainment. In 2015 Brill directed THE DO-OVER for Netflix and Happy Madison co-starring David Spade. In 2016 Brill directed Sandler again in SANDY WEXLER. It co-starred Jennier Hudson as Courtney Clark.

In 2017 through 2018 Brill filmed Sandler for his stand-up comedy special, ADAM SANDLER – 100% FRESH. Using over 20 venues and 40 performances it has been called “ground-breaking” and Sandler’s, “best comedy in years.”

Aside from writing and directing, Brill has kept busy as an actor on such diverse films as SEX, LIES, AND VIDEOTAPE, POSTCARDS FROM THE EDGE, EDWARD SCISSORHANDS, BATMAN RETURNS, WHEN A MAN LOVES A WOMAN, THE WEDDING SINGER, BIG DADDY, and KNOCKED UP.

Marguerite Moreau's resume beautifully balances cutting edge independents and flashy studio fare. Whether playing the unattainable dream girl in Wet Hot American Summer or the obsessed vampire researcher in Warner Brothers' Queen of the Damned, she always brings fierce intelligence and charisma to her characters. This was in full display most recently on the long-running hit series Grey's Anatomy, in which Marguerite had a memorable arc as "Emma," a doctor who shows up at a hospital gala fundraiser to steal donors for her own hospital and in the process begins a romantic relationship with another doctor. After wrapping the second season of Netflix’s reboot of Wet Hot American Summer, Marguerite guest starred on the first season of American Crime Story. She can next be seen in Facebook Watch’s upcoming series, The Birch.

Elden has had an illustrious career before and beyond his participation in Marvel's Daredevil on Netflix, The Hunger Games Mockingjay 1 & 2, and The Mighty Ducks films, and starring alongside notables such as Tom Hanks, Denzel Washington, James Gandolfini, Harry Dean Stanton and Sharon Stone and working with directors such as Tony Scott and Robert Zemeckis. When he's not shooting, Elden's personal life centers around his son and staying close to his mother and siblings. Music is also a passion of Elden's, he plays bass in a Doom Metal band. He resides in Los Angeles.

Vicellous Shannon is a native of Memphis Tennessee raised in Orange County California. He was a promising high school baseball player until being sidelined by a severe hamstring injury. He took an interest in acting and began taking a two-hour bus ride to Laguna Hills where he studied acting and performed chores at the facility in lieu of tuition. He is known for his breakout performance as "Lesra Martin" in the 1999 film The Hurricane starring opposite Denzel Washington. He later starred in Annapolis opposite James Franco, Hart’s War alongside Bruce Willis and Colin Farrell as well as Freedom Song with Danny Glover. On television, Vicellous recurred on FOX’s critically acclaimed 24 as "Keith Palmer," the son of the presidential candidate "David Palmer" (played by Dennis Haysbert). He’s recurred on CSI and JAG, both for CBS. He’s had memorable guest roles on Sons of Anarchy, House, Cold Case, Without a Trace, and CSI: Miami and Judging Amy amongst others. In the more recent years, he played a supporting role with Nicolas Cage in the film The Humanity Bureau as "Agent Porter" and starred in Distorted opposite Christina Ricci and John Cusack. He is also producing and has lent his talent to the development and financing of several films in which he has also starred in. Vicellous is also a proud father of two teenage daughters.

Katie Walsh is a Los Angeles-based film critic and journalist, reviewing weekly film releases for the Tribune News Service, and the Los Angeles Times. Her work has also appeared on The Playlist, Nerdist, Playboy, Slate, The Hairpin, indieWIRE, Women and Hollywood, Town & Country, Movieline, CAP the Magazine, and Nonfics, and she makes occasional appearances on KCRW’s Press Play with Madeline Brand. She has covered the Sundance, Toronto, South by Southwest, Marrakech, True/False, Los Angeles and Santa Barbara International Film Festivals.

Katie is a member of the Los Angeles Film Critics Association, has served for several years on the jury for the Women In Film Finishing Fund grant, and also been a member of the nominating committee for IFP’s Gotham Awards. She has juried for the Florida Film Festival and the Defy Film Festival, and has judged the student films for the University of Arizona’s "Dream in Widescreen."

Katie earned her B.A. in Film Studies from Wesleyan University, and her M.A. in Critical Studies from the USC School of Cinematic Arts, where she worked as an associate programmer of screenings and special events, managing events and moderating Q&As. She has also worked at Lionsgate Films, and produced the short film The Better Half, which premiered in competition at the 2009 South by Southwest Film Festival. She is a Native Virgin Islander, born and raised on the island of St. Croix, U.S. Virgin Islands. She is also a yoga teacher, having completed a 200-hour yoga teacher training at One Down Dog in LA.

Please check out Twitter or Rotten Tomatoes for links to recent reviews.

Please bring a valid USC or State ID or print out of your reservation confirmation, which will automatically be sent to your e-mail account upon successfully making an RSVP through this website. Doors will open at 6:30 P.M.