Outside the Box [Office], USC Comedy at the School of Cinematic Arts, and IFC Midnight invite you and a guest to attend a special preview screening of 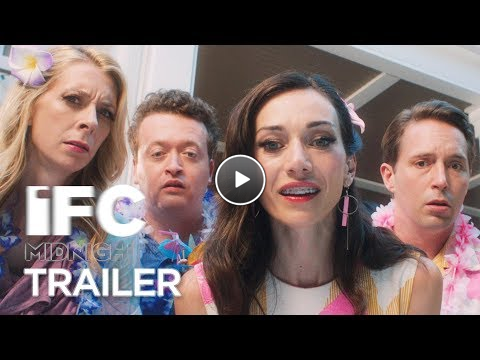 In a day-glo-colored, bizarro version of suburbia where adults wear braces on their already-straight teeth, everyone drives golf carts, and children magically turn into golden retrievers, soccer moms and best friends Jill (Jocelyn DeBoer) and Lisa (Dawn Luebbe) are locked in a passive aggressive battle-of-the-wills that takes a turn into the sinister when Lisa begins systematically taking over every aspect of Jill’s life—starting with her newborn daughter. Meanwhile, a psycho yoga teacher killer is on the loose, Jill’s husband (Beck Bennett) has developed a curious taste for pool water, and Lisa is pregnant with a soccer ball. That’s just the tip of the gloriously weird iceberg that is the feature debut from writers-directors Jocelyn DeBoer and Dawn Luebbe, a hilariously demented, Stepford Wives-on-acid satire destined to be an instant cult classic.

Dawn Luebbe is a LA based writer, director, and actor. She recently co-wrote and co-directed her first feature, "Greener Grass", with Jocelyn DeBoer. It is based on their 2016 SXSW award-winning short by the same name. Dawn and Jocelyn recently directed two episodes of TruTV’s “Adam Ruins Everything.” In 2017, they sold a television pilot to IFC. Dawn got her start as a stage actor in New York, where she performed in off-Broadway shows for nearly a decade. She is now an LA-based writer, actor and director. She has appeared on HBO's "High Maintenance", TruTV’s "Adam Ruins Everything", and is the co-creator and star of the IFC web-series “Rage”. She recently published a book of comedic essays and preteen diary entries,"My 1992 Diary", with Abrams Books. She is a veteran writer and performer at The Upright Citizens Brigade Theatre.

Beck is a writer/performer who is currently a cast member on SATURDAY NIGHT LIVE. He recently wrapped production on the feature GREENER GRASS. He is also a member of the sketch group GOOD NEIGHBOR with KYLE MOONEY, NICK RUTHERFORD & DAVE McCARY. Beck's credits include the independent film INTRAMURAL opposite KATE MCKINNON and JAKE LACY which premiered at the 2014 Tribeca Film Festival, UNICORN opposite Lauren Lapkus, Lucy Hale and Nick Rutherford, BESIDE STILL WATERS directed by Chris Lowell, and DEAN written and directed by DEMETRI MARTIN. Beck is also known for the AT&T “It’s Not Complicated” commercials where he interviews children directed by JORMA TACCONE. Beck can also be heard as one of the lead voices in the Illumination Entertainment animated feature SING, as well as the voice of "Launchpad McQuack" on DUCK TALES.

When the incomparable three-time Emmy nominated actress Dot Jones stepped onto the set of our first feature film, the two of us barraged her with a flood of gratitude that she accepted the role. And she said, “Are you kidding? I didn’t even finish the script before I told my agent ‘yes.’ I got a couple of pages in and I said, ‘these girls are idiots! Of course, I’m doing this!’”

Well, Dot Jones was wrong. We are NOT idiots.

In fact, far from it, Dot! Sure, we might not have seemed like your typical baseball-cap-wearing, video-village-lurking directors when we barrelled toward her: Jocelyn, in head-to-toe pink with her movie-son by her side, a golden-retriever wearing khakis and a Purple Heart pinned to his polo. Dawn, with a soccer ball pregnancy tucked up under lavender tulle, both of us wearing braces on our teeth. But just like non-idiots George R.R. Martin, JK Rowling, and Rand McNally before us, we have created a world with its own logic, hand-drawn maps, and board games based off it (ours will hit the market as soon as anyone takes an interest).

Our world is a demented version of suburbia. And who better to satirize oh-so idyllic, polite America than these two Midwestern middle children? Years ago, we were put on a house team together at The Upright Citizens Brigade Theatre in New York (Dot Jones ever do that? Didn’t think so.). We bonded one chilly night (but not cold for us) when all the East coasters had left early and the two of us were putting the chairs away (we were happy to do it!). There was one piece of a black-and-white cookie left (so yummy, so exotic to us) and, like an overplayed “My Fair Lady” CD skipping, we entered a loop of “You have it!” “No, please, you have it!” and so on. Neither of us ate that piece of cookie that night. And after only a few short half-hours, we threw it away together. And it was at that moment we knew we would be incredibly productive working together. And, we should definitely be directors.

Our first project together was the short film version of “Greener Grass” we made back in 2016. That short (for your information, Dot!) happened to win “Best Gag” at a film festival in Argentina for a joke about how Wilson the volleyball is Tom Hanks’ baby. We put the same joke, same exact wording, in the feature version of the film, hoping to win a second award so we don’t have to keep passing the first one back and forth.

But unlike Mr. R.R. Martin, Ms. Rowling, and R. McNals, we didn’t just stop at creating our world, we also directed it, and starred in it. Now, Earth to Dot: Would a couple of idiots choose to triple-threat their first feature? A movie that stars children, a baby, and a seven-month-old puppy. A movie where we chose not to show any vehicles other than golf carts (because golf carts = comedy gold, Dot!). A movie that co-stars a soccer ball with half a dozen costume changes. And most importantly, a movie featuring so many of our aging friends that we had to make a Hail Mary decision to give every adult in the damn thing braces to look younger. Does this sound like a movie made by idiots? We think not.

But, alas. Dot Jones can say whatever she wants because she’s a 15-time world arm wrestling champion (and we have delicate elbows).