Followed by a Q&A with Ljubomir Stefanov and Tamara Kotevska 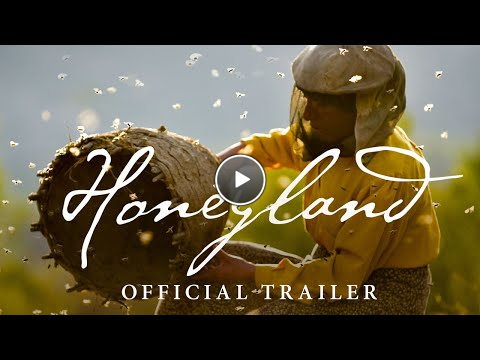 Hatidze lives with her ailing mother in the mountains of Macedonia, making a living cultivating honey using ancient beekeeping traditions. When an unruly family moves in next door, what at first seems like a balm for her solitude becomes a source of tension as they, too, want to practice beekeeping, while disregarding her advice.

The most awarded film at of this year's Sundance Film Festival, winning the World Cinema Grand Jury Prize, a Special Jury Award for cinematography, and another Special Jury Award for Originality, Honeyland is an epic, visually stunning portrait of the delicate balance between nature and humanity that has something sweet for everyone. The Honeyland story began long before humans ever lived in the region, but our narrative starts with its last two remaining inhabitants: Hatidze and her mother Nazife. Just as worker bees spend their entire lives taking care of the queen bee which never leaves the hive, Hatidze has committed her own life to the care of her blind and paralyzed mother, unable to leave their ramshackle hut. The film is set in an unearthly lan, unattached to a specific time and geography, unreachable by regular roads, and yet, only 20 km away from the nearest modern city.

The families here use an ancient Turkish vernacular, so the film is driven by visual narration rather than dialogue, the characters are understood through their body language and their relationships, and their emotions. This visual and visceral communication draws the audience closer to the protagonists, and more importantly - closer to nature. Engendering the feeling that we as humans are but one species among many, equally affected by the circumstances around us.

The Nagoya Protocol - a United Nations Convention on Biological Diversity (CBD) - came into force at the end of 1993 and established global guidelines on access to natural resources. Its objective was the promotion of fair and equitable sharing of benefits for both providers - i.e. land, plants, animals - and users - i.e. humans - of resources. Genetic diversity, or biodiversity, enables populations to adapt to changing environments and a changing climate, contributing to the conservation and sustainability of resources. The “honey crisis” in this film illustrates the risk of ignoring these protocols and upsetting the respect for biodiversity.

Hatidze’s story is a microcosm for the wider idea of how closely intertwined nature and humanity are, and how much we stand to lose if we ignore this fundamental connection.

Born 1975 in Skopje. Over 20 years of experience in development and production of communication concepts and documentaries related to environmental issues and human development. Working for clients such UN agencies, Euronatur, Swisscontact etc. Previous films include The Noisy Neighbours (2005) and Lake of Apples (2017).

Born on 9th of August, 1993, in Prilep, Macedonia. Tamara won the Best Balkan Film award at the Tirana International Documentary Film Festival with her graduation documentary Studants (49’), supported by Trice Films and the Faculty of Dramatic Arts- Skopje.

Her first professional environmental documentary Lake of Apples (27’), supported by UNDP (as writer and co-director) played at the International Nature Namur Festival, the Prix de l'environnement (2017) award in France, an Honorable mention at the Innsbruck Film Festival in Austria (2017), and the Perseus award at T-Festival in Brno, Czech Republic (2017).