ANNA AND THE APOCALYPSE

Anna and the Apocalypse About Anna and the Apocalypse 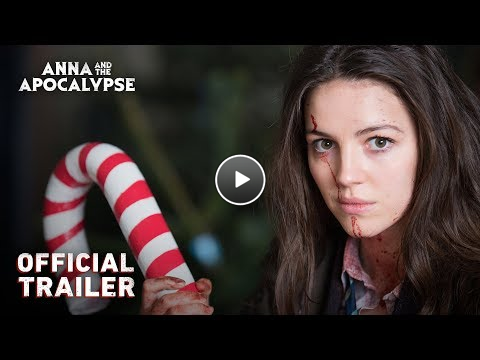 A zombie apocalypse threatens the sleepy town of Little Haven – at Christmas – forcing Anna and her friends to fight, slash and sing their way to survival, facing the undead in a desperate race to reach their loved ones. But they soon discover that no one is safe in this new world and, with civilization falling apart around them, the only people they can truly rely on are each other… John McPhail began his career working in the camera department. Six years later he made his first short film, a romantic comedy called "Notes." The film picked up the Best Scottish Film award at the Bootleg film festival in Edinburgh. "Notes" has gone on to screen all over the UK and North America, picking up awards including Audience Choice, Best Film, Best Director and Best Actor and Best Editing. Later that year, he released "V for Visa" and "Doug & Steve's Big Holy Adventure." "V for Visa" went on to win the Best Director accolade at TriBeCa Film Centre in New York as part of the Bootleg Film Festival. John’s next short "Just Say Hi" was entered into to the Virgin Media Shorts Competition, winning two out of the three awards, making him the only director in the competition’s history to win multiple awards. The film was later picked up by the Très Court International Film Festival where it was screened in over 100 cities in 23 countries. John’s crowd-funded feature film Where Do We Go From Here? had its world premiere at the Sydney Indie Film Festival in Australia where it was nominated for eight awards and won Best Film, Best Score and Best Supporting Actress.

Chris Leveaux trained at ArtsEd in London. He has appeared in films including The Wicker Tree, Love Me Till Monday, Writer's Retreat and The Greatest Living Englishman. His theater credits include the lead role of William in Punk Rock, directed by Emily Moir, the lead role of Julian in The Green Bay Tree, directed by Tim Luscombe and roles in Peter and Alice and Privates on Parade, both directed by Michael Grandage. Television credits include "When Boris Met Dave," "Well Funny," "Dark Matters," "37 Days," "The Crimson Field," "Theresa vs Boris," "The Halcyon" for ITV and most recently "Murdoch Mysteries" for CBC.