Produced and Directed by Moustapha Akkad
Screenplay by H.A.L. Craig and Tewfik El-Hakim

Please also join us on Thursday, February 22nd for a 7:00 P.M. screening of Not Without Nerve, a brand-new documentary about the epic struggle of Moustapha Akkad to bring The Message to the screen, followed by a Q&A with Moustapha's son, Malek Akkad. 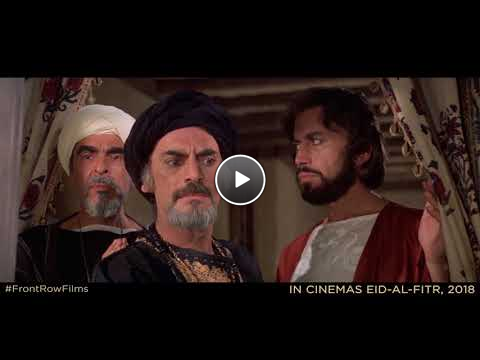 It is the 7th-century and in Mecca powerful leaders are in conflict with Mohammed who attacks the many injustices their way of life produces – slavery, drunkenness and cruelty.

Mohammed claims to have seen a vision of the angel Gabriel and calls the people of Mecca to worship one God only – not the 300 idols of Kaaba, the holy shrine.

Mohammed and his followers meet secretly, despite bitter opposition, and the leaders of Mecca respond with persecution and torture. The Moslems are forced to leave Mecca and find a sanctuary in Medina.

After a revelation from God, Mohammed agrees to take arms against Mecca, and at the Wells of Bedr the inexperienced Moslem troops are victorious. However at the battle of Uhud they are beaten and forced to flee to the hills. They accept an offer of a ten year truce so that they can continue to spread the work of god. Mecca breaks the truce and Mohammed’s army marches on the city, but no battle ensues as the people of Mecca are now ready to accept the prophet. The idols of the Kaaba are destroyed and holy place is dedicated to the worship of one god. Mohammed is the Prophet… the Messenger of God. Moustapha Akkad was a Syrian American film director and producer known for classic films such as The Message and Lion of the Desert. He is also well known for producing the more contemporary horror franchise Halloween. Moustapha was born in Aleppo, Syria to a modest household. After graduating high school, he was given 200 dollars and a copy of the Quran before moving to the United States to study film. He received his under graduate degree from UCLA, followed by a Master’s degree from the University of Southern California. As an ambitious young graduate Moustapha created a number of successful television series and showed promise as a director/producer. His jump to film came when he embarked on the daunting task of shooting The Message, an epic depiction of the life of Mohammed and the foundation of Islam. His goal was to change the negative portrayal of Muslims in mainstream media, and ultimately bridge the gap between the East and West. Against all odds the 3-hour epic was made, and is to this day regarded as a classic. After The Message he made Lion of the Desert and the original Halloween film, a franchise that is still in existence today.

Moustapha tragically passed away on November 11, 2005 in the Amman bombings. Yet his legacy lives on as an outstanding filmmaker, a wonderful father, and an exceptional representative for the nation of Islam.