THE SQUARE with Writer/Director/Editor Ruben Östlund Followed by a Q&A with Ruben Östlund 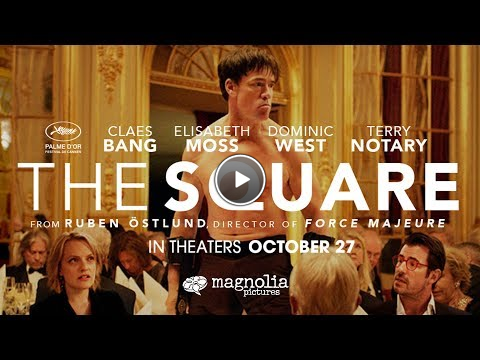 Christian is the respected curator of a contemporary art museum, a divorced but devoted father of two who drives an electric car and supports good causes. His next show is "The Square", an installation which invites passersby to altruism, reminding them of their role as responsible fellow human beings. But sometimes, it is difficult to live up to your own ideals: Christian’s foolish response to the theft of his phone drags him into shameful situations. Meanwhile, the museum's PR agency has created an unexpected campaign for "The Square". The response is overblown and sends Christian, as well as the museum, into an existential crisis. The Square is a sanctuary of trust and caring. Within it we all share equal rights and obligations.
-- Inscription on the work of art "The Square"

Just as with Force Majeure, The Square is a drama/satire. I wanted to make an elegant movie, with visual and rhetorical devices to provoke and entertain viewers. Thematically the film moves between topics such as responsibility and trust, rich and poor, power and powerlessness. The growing beliefs in the individual and the declining beliefs in the community. The distrust of the state, in media and in art.
-- Ruben Östlund

Ruben Östlund was born in 1974 in Styrsö, a small island on the West Coast of Sweden. He studied graphic design before enrolling at the University of Gothenburg, where he met Erik Hemmendorff with whom he later founded Plattform Produktion. An avid skier, Östlund directed three ski films, alluding to his taste for long sequence shots, a taste he structured and developed throughout his film studies and which to this day remains an important trademark of his work.

Ruben has become well known for his humorous and accurate portrayal of human social behaviour, as well as for his renowned used of Photoshop and other forms of image-processing software in his films. His feature debut The Guitar Mongoloid, won the FIPRESCI Award at Moscow in 2005. His second feature, Involuntary, produced by the co-founder of Plattform Produktion, Erik Hemmendorff premiered in Cannes Un Certain regard 2008. The film was then distributed in more than 20 countries and shown at numerous festivals, awarding Ruben international recognition.

Two years later, he won the Golden Bear in Berlin for Incident by a Bank, a short film in which every camera movement was computer generated in post-production. The premiere of his third feature film Play (2011) was held in Cannes at the Director’s Fortnight, where he was awarded the ‘Coup de cœur’ Prize. After Cannes, Play was shown in Venice and Toronto as well as numerous other festivals where it received additional prizes and distinctions: among others, Play was nominated for the prestigious LUX prize of the European Parliamant and won the Nordic Prize, the highest distinction in Scandinavia. His fourth feature film, Force Majeure, premiered at Un Certain Regard in Cannes, where it was awarded the Jury Prize. The film was selected in countless festivals and won 16 Best Foreign film awards. Force Majeure was also nominated at the Golden Globes and shortlisted for an Oscar®. The film has been distributed in over 70 countries.

The Square is the fourth of Östlund’s films to premiere in Cannes and his first feature to be selected to win the Palme d’Or.