About My Scientology Movie 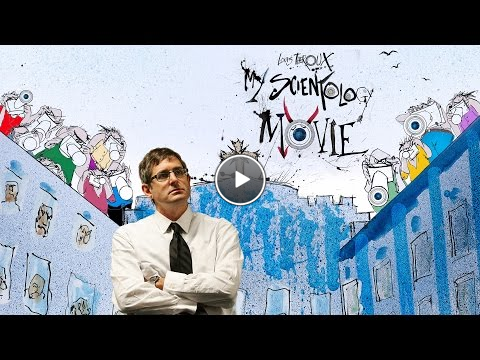 "I find that the most inexplicable behavior is motivated by very relatable human impulses," comments Louis Theroux as he heads to Los Angeles for his feature documentary, in collaboration with director John Dower and double Academy Award winning producer Simon Chinn, exploring the Church of Scientology. Following a long fascination with the religion and with much experience in dealing with eccentric, unpalatable and unexpected human behavior, the beguilingly unassuming Theroux won’t take no for an answer when his request to enter the Church’s headquarters is turned down. Inspired by the Church’s use of filming techniques, and aided by ex-members of the organization, Theroux uses actors to replay some incidents people claim they experienced as members in an attempt to better understand the way it operates. In a bizarre twist, it becomes clear that the Church is also making a film about Louis Theroux. Suffused with a good dose of humor and moments worthy of a Hollywood script, My Scientology Movie is stranger than fiction. I had never worked with anyone in front of the camera before. And there was no access. Although … Louis isn’t actually a presenter, he’s a journalist with a unique on-screen presence, the Alan Whicker of our generation, who I grew up watching on his Weird Weekends television series. And this was a subject he’d been trying to make a film about for over a decade. Here was the last chance.

Once I realized just how dumb my decision had been, the first challenge was how to make the film without any access, the lifeblood of a documentary. Louis had already been in contact with prominent apostates from the Church but we didn’t want to make a retrospective history of the religion, not only because it wouldn’t suit Louis’ style, whereby he’s always looking to access the mind-set of those he is filming with, but it also felt like this subject deserved a bolder approach.

Scientology is usually portrayed as strange and weird. There are certainly unusual aspects to its scripture, with spaceships and aliens and we were told about sessions in which believers talk to ashtrays. But part of that unique on-screen presence is Louis’ desire to find out how the best human qualities are often put at the service of questionable projects, and so we wanted to go further than merely documenting one of the world’s newest religions.

We came up with a very simple solution - a group of actors working alongside our key former members to try and gain an insight into what it actually feels like being a Scientologist.

This approach was also in keeping with the actual story because Scientology was founded in Los Angeles by a sci-fi writer also desperate to be a film director. L Ron Hubbard wrote screenplays and in the 1950s initiated ‘Project Celebrity’ to enlist Hollywood actors to spread his gospel, and today several of its most famous disciples are A-List stars. Even their current leader David Miscavige started as a camera operator in the Church’s own movie studio.

Before I came on board the previous director had been keen to go down the Hollywood route by creating a series of mini-movies in different styles, ranging from biblical epic to sci-fi, as a way of telling the Scientology backstory. However Louis was less interested in the actual filmmaking process and wanted to try and keep the story in the present tense, even if we didn’t have access.

For me there was still merit using actors because they were a part of how Scientology portrayed itself to the outside world. We just needed to simplify the idea – no polished dramatic re-enactments, if anything they had to have an Ed Wood homemade style of filmmaking, more like improvised sessions or psychological experiments. This was more suited to Louis’ freewheeling persona, as well as the Church’s own style of filmmaking.

I was inspired by an obscure Iranian film called A Moment of Innocence, while Louis had become obsessed with the documentary The Act of Killing and so we decided to start with a behind-the-scenes moment that all movies have to have – the casting. Using the former high-ranking member turned whistleblower Marty Rathbun we attempted to cast an actor to play leader David Miscavige. In what he would actually be playing we weren’t quite sure at this point but it seemed to work, and more importantly, this film was now actually happening…

Despite the off-the-cuff approach we still wanted to make something that might play on the big screen. I had a simple rule of thumb that we didn’t want to make Porridge - the film, which in being adapted for the cinema just became a longer version of the sitcom. The hope was to take the best of Louis’ television persona and add elements that might make it more cinematic.

Again simple things, such as my DoP Will Pugh constructing a car rig that enabled Louis to have these intimate conversations with our contributors, an appropriate style for a film set in LA. Or the fixed robotic cameras that would capture every single moment underwent by all of our actors in the drills sequence. Louis had originally suggested that Will and myself have a “three martini lunch” that day, whereby we popped in and out, grabbing selective moments. But we wanted to give it a look and feel that again fitted in with the story.

This approach generated so much material and I was fortunate to have editor Paul Carlin who was able to keep a clear head and not become enturbulated as to where this film might be actually heading. Likewise producer Simon Chinn and associate producer Vanessa Tovell who backed us, however outlandish the requests from over in California got, a potentially scary feeling for a production team on a film as improvised as ours.

And then of course there was Louis. It was crucial for me that that unique persona remained intact. Many people asked me if it was just a persona, a shtick constructed for the camera. It isn’t. He really is like that. I likened it to Kaa in the Jungle Book with his whirling eyes; there were even times when I felt myself being drawn in … Thankfully like Obi Wan Kenobi in Star Wars he only uses his powers for good and he is genuinely interested in discovering what makes normal people do unusual things.

It was the most enjoyable and collaborative experience I’ve had whilst making a film. All of us, however corny it sounds, kept this ambition that we were gonna try and make a movie.

And that’s when things got interesting. Somehow the Church discovered what we were doing on the sound stages of LA and, in turn, they started to make a film about us …

For years I’ve been fascinated by Scientology.

More than ten years ago, I approached the church to see if they might let me in to make a documentary. I thought I might be able to bring a sense of nuance and perspective to people’s understanding of a faith that has been much ridiculed. Just as I have done with other non-mainstream stories, I hoped to see it from the inside and make a human connection with its clerics and congregants. But I was repeatedly turned down.

About four years ago, the producer Simon Chinn approached me about doing a documentary for theatrical release and mentioned Scientology as an idea. For the first time, I began thinking about whether there might be a way of doing it without traditional access.

A prolonged period of development followed. We approached the church again - and were rebuffed again. We also put feelers out with the community of disaffected ex-Scientologists, some of whom still believe in aspects of the Scientology religion, but feel that “Official Scientology” has lost its way under the influence of David Miscavige.

It occurred to us that the “Hollywood” character of Scientology – its recruitment of actors; its use of Tom Cruise as a role model and poster boy; its dissemination through glossy promotional films – might be the key to making our film. L. Ron Hubbard himself had always nurtured a dream of making it as a Hollywood director. And so it felt logical and true to the spirit of Scientology to use Hollywood techniques – casting calls, actors, improv sessions, reenactments – to create a sense of Scientology from the inside, filming it all in and around Los Angeles.

It was clear that the success of the “Hollywood techniques” depended on the help of a handful of ex-Scientologists. Under the influence of a documentary I had seen recently called The Act of Killing I began to see re-enactments as a way of creating a vivid picture of the allegations of abuse  – and an almost-therapeutic technique for taking the protagonists back into the past and examining their involvement in Scientology.

I was very fortunate in being put together with the director John Dower who saw the value in the re-enactment idea and had the vision to make it work but also the sense of discipline to prevent it from spinning out of control.

Our other great piece of good fortune was in finding Marty Rathbun – who was at one time one of the most senior executives in Scientology, the “Inspector General” – and in his willingness to go on a journey of inquiry – asking questions about faith and apostasy and revolutionary morality – while tolerating the emotional roller coaster of my questions and also the attention of hostile Scientologists who began taking an interest in what we were doing.

In the course of making my film I came to believe I was being tailed by private investigators, someone in Clearwater, Florida (Scientology’s spiritual mecca) attempted to hack my emails, we were filmed covertly, I also had the police called on me more than once, not to mention a blizzard of legal letters from Scientology lawyers.

And yet, at every step I remained open to Scientology’s good points and tried to see it for what it is: a system of belief that is not so different from other religions, capable of enlarging the soul as well as crushing the spirit; a tool for wickedness but also of kindness and self-sacrifice.

And so the final and most controversial truth about Scientology may not be about the misdeeds that have been committed in its name, but the potentially life-giving power of its vision. For my part I still find parts of it oddly seductive.

This screening is free of charge and open to the public. Please bring a valid USC ID or print out of your reservation confirmation, which will automatically be sent to your e-mail account upon successfully making an RSVP through this website. Doors will open at 11:30 A.M.