Outside the Box [Office], USC Comedy, and 20th Century Fox Television, invite you and a guest to a special preview screening of the first two episodes of the new FOX Original Comedy Series 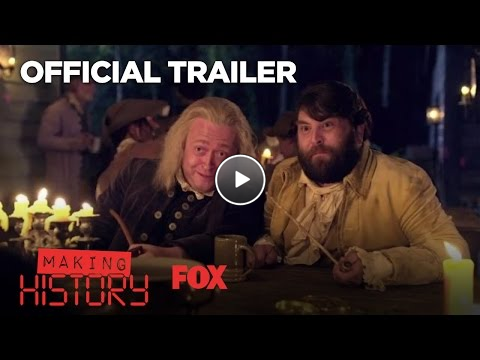 Produced by Phil Lord and Christopher Miller (The LEGO Movie, 21 Jump Street), and created and written by Julius “Goldy” Sharpe (Family Guy, The Grinder), the new comedy Making History follows three friends from two different centuries as they try to balance the thrill of time travel with the mundane concerns of their present-day lives. It’s a rollicking historical adventure and a contemporary comedy about love, friendship and trying to fit in to an increasingly complex and impersonal world.

DAN (Adam Pally, The Mindy Project, Happy Endings), a facilities manager at a small Massachusetts college, recently discovered time travel and has been transporting himself back to the 1700s to spend time with the colonial woman for whom he’s fallen. In the present, Dan is misunderstood by all, and anxious that life is passing him by. But by claiming song lyrics, lines from movies and stand-up bits as his own in the 18th century, he’s absolutely hilarious – he gets the girl and makes friends.

But Dan’s actions in the past are messing up the present. That woman he’s dating is not just any woman. She’s Paul Revere’s daughter, DEBORAH (Leighton Meester, Gossip Girl), and Dan’s meddling causes her father to delay his famous ride, which may have altered the outcome of the entire American Revolution.

To set matters right, Dan enlists the help of a brilliant, polished and popular history professor at the college, CHRIS (Yassir Lester, Girls, Key and Peele), who’s now given the incredible opportunity to actually live the history he teaches. Can Dan, Chris and Deborah save America as we know it? Can a woman from 1775 adapt to life in 2016? Can the three intrepid time travelers improve the past, help the helpless, fight for justice and find true love and friendship? Hailing from Livingston, NJ, Adam Pally has quickly found his place as both actor and comedian in Hollywood. Pally is widely known for starring as "Max Blum" in the network comedy series Happy Endings. He recently starred in and produced the film Joshy, which premiered at Sundance Film Festival last January and was released this past summer. He also appeared in the feature comedy Middle School: The Worst Years of My Life, which was released this past fall.

In 2013, Pally joined the cast of The Mindy Project as a series regular for two seasons. In 2015, he also starred in the independent films Night Owls and Slow Learners. Additional film credits include the indie comedy A.C.O.D., with Amy Poehler and Adam Scott; and the comedy The To Do List, starring opposite Rachel Bilson and Andy Samberg. He also had a cameo in the blockbuster film Iron Man 3.

In addition to his acting credits, Pally’s production company, Clone Wolf Productions, is developing numerous projects for broadcast, cable and new media. Pally has been a member of the Upright Citizens Brigade since 2003, and continues to both write and perform sketch comedy. A graduate of the New School in New York, Pally currently resides in Los Angeles.

Yassir Lester is an actor, stand-up comedian and writer from Marietta, GA. He has written for The Carmichael Show, Black Dynamite and Girls, the latter on which he also has appeared in a recurring role. He regularly does stand-up comedy shows in Los Angeles and around the country. Lester currently resides in Los Angeles.

John Gemberling recently appeared in a recurring role on the cable comedy series Broad City. He also was featured in the network comedy series Marry Me. He will be seen next as comedian John Belushi in director David Wain’s historical film on National Lampoon, A Futile and Stupid Gesture. Gemberling also recurred on the network comedy Super Fun Night and the cable comedy The Heart, She Holler. Other TV appearances include Angie Tribeca, Gorgeous Morons, Young and Hungry, Happy Endings, Kroll Show, Childrens Hospital, Delocated, Comedy Bang Bang, Key & Peele and the series finale of The Office.

Additional credits include Todd Solondz’s film, Palindromes, the cable film Worst. Prom. Ever. and Blackballed: The Bobby Dukes Story, in which he acted alongside Ed Helms, Paul Scheer and Rob Corddry. Gemberling also co-created, wrote, produced and starred in cable’s Fat Guy Stuck in the Internet, and wrote for The Man Show and Human Giant. He currently resides in Los Angeles.