USC Comedy at the School of Cinematic Arts, USC Visions and Voices: The Arts and Humanities Initiative, and TBS, invite you and a guest to attend Featuring Screenings of Episode #1: “The Mysterious Disappearance Of The Girl No One Knew”
and Episode #2: “The Woman Who Knew Too Much”

Presented during the USC Comedy Festival, Vol. 3: The Changing Face of Comedy, taking place at USC from October 28th - 30th, 2016.

View the full calendar of events at: http://cinema.usc.edu/ComedyFestival 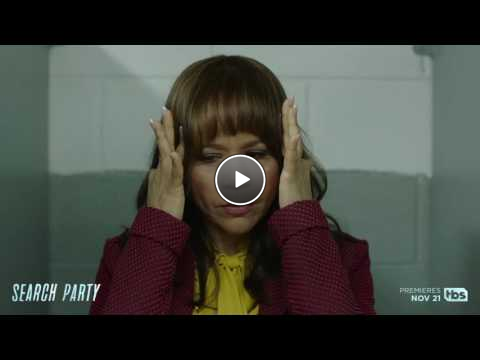 Sarah-Violet Bliss and Charles Rogers created, wrote and co-directed Search Party for TBS. Previously, the pair co-wrote and co-directed the feature film Fort Tilden, which won the Grand Jury Prize for Narrative Feature at the 2014 SXSW Film Festival. Sarah-Violet and Charles also wrote for Wet Hot American Summer: First Day Of Camp on Netflix and season two of Mozart In The Jungle on Amazon, which won a Golden Globe for Best Comedy Series. Bliss and Rogers attended NYU Tisch School’s Graduate Film Program together. Bliss attended Oberlin College and is originally from Brooklyn, NY; Rogers attended St. Edward’s University and is originally from the Texas-Mexico border.

Success arrived early for Alia Shawkat, and she continues to establish herself as a highly sought after young actress in both film and television. This year, she has had leading roles in two films: Netflix's original film Pee-Wee's Big Holiday produced by Paul Reubens and Judd Apatow, and the indie thriller Green Room, alongside Imogen Poots and Sir Patrick Stewart. And now she's starring in TBS's dark comedy series Search Party, an Official TV Selection at the 2016 SXSW Film Festival.

Shawkat's upcoming films include Mike Mills's indie family drama 20th Century Women, opposite Annette Benning, Greta Gerwig and Elle Fanning; Clea DuVall's directorial debut, The Intervention, with Cobie Smulders, Jason Ritter and Natasha Lyonne, which premiered at the 2016 Sundance Film Festival and will be released by Paramount Pictures later this year; and Amber Tamblyn's directorial debut, Paint It Black, based on the book of the same name by White Oleander author Janet Fitch.

In the past few years, Shawkat has been seen in a slew of highly anticipated film projects including: Sebastian Silva's Nasty Baby, which she also co-produced; the comedic indie horror The Final Girls; Max Landis' Me Him Her; The Driftless Area, opposite Anton Yelchin and Zooey Deschanel; Lawrence Michael Levine's Wild Carnies; Night Moves, opposite Jesse Eisenberg and Dakota Fanning; and The To Do List, written and directed by Maggie Carey.

Shawkat is well known for her role of Maeby Funke on the Emmy®-winning cult comedy series Arrested Development. She was recently seen on the small screen recurring in HBO's Getting On and guest starring on Comedy Central's Broad City.

Born in Palm Springs, Shawkat lives in Los Angeles. Off-screen, she is a talented jazz singer and pianist, as well as an accomplished painter and illustrator. Shawkat's art can be viewed at her website MutantAlia.com.

Michael Showalter is an actor, writer, director and producer. He is a founding member of the New York based comedy groups The State and Stella. In 2001, he co-wrote and starred in cult comedy Wet Hot American Summer with Paul Rudd, Bradley Cooper, and Amy Poehler, among many others. In 2005, Showalter made his feature length directorial debut with The Baxter, starring Michelle Williams, Justin Theroux and Elizabeth Banks. In 2009, he co-created the Comedy Central series Michael and Michael Have Issues with Michael Ian Black. He also co-wrote and produced the Lionsgate film They Came Together starring Paul Rudd and Amy Poehler in 2014. In 2015, Showalter co-created and starred in the Netflix series Wet Hot American Summer: First Day of Camp, which reunited the entire cast of the original film for an eight-episode prequel.

He currently resides in Los Angeles with his wife Kalin, their two children, and four cats.

Meredith Hagner shot the female lead role in the indie film Folk Hero & Funny Guy with Alex Karpofsky and Wyatt Russell, which made its debut at Tribeca Film Festival 2016. Meredith made her Sundance debut in David Cross's Hits (she was named one of Indiewire’s “Ten To Watch” and the New York Times review reported “a note perfect performance.") She has also appeared in Simon Helberg’s We’ll Never Have Paris and Whit Stillman's Damsels In Distress, Woody Allen’s Irrational Man and the SXSW sensation Creative Control.

On television, Hagner is one of the series leads on TBS’s new series Search Party. She also recently recurred on Veep for HBO. She was a series regular on Men at Work for TBS, FX's Lights Out and had a recurring role on Royal Pains. Among numerous guest star roles, Meredith’s favorites have been on Louie (as Jeremy Renner's mellow girlfriend) and on The Following (as a particularly deranged killer).

Among Hagner's first acting jobs was the role of angry and confused teenager 'Liberty' on As the World Turns (for which she was nominated for an Emmy).

ALESSANDRO AGO (SCA Director of Programming and Special Projects/Moderator)

Alessandro Ago is the Director of Programming and Special Projects at the USC School of Cinematic Arts, where he programs film screenings, festivals, guest speakers and special events. In addition to programming popular courses taught by film critic Leonard Maltin and Pulitzer Prize-winning television critic Mary McNamara, Ago curates Outside the Box [Office], a screening series dedicated to bringing new international, documentary and independent cinema to USC, often followed by conversations with the filmmakers, which Ago moderates. He is also one of the curators of the American Film Showcase, an international documentary film diplomacy program funded by the U.S. Department of State, that has taken Ago to Cyprus, China, Egypt, Tajikistan, Mexico, South Korea, Bolivia, Peru, Bangladesh, Indonesia, Botswana, Georgia, Romania, Panama, Turkmenistan, Vietnam, India, and many future destinations.

Episode #1: “The Mysterious Disappearance Of The Girl No One Knew”

When Dory discovers that her friend, Chantal has gone missing, she becomes obsessed with finding out what happened, even though her boyfriend, Drew and friends, Elliott and Portia, could care less.

Episode #2: “The Woman Who Knew Too Much”

Dory begins to doubt whether she saw Chantal the night before, but an offbeat realtor claims that she has the proof that Dory is looking for. About the USC Comedy Festival, Vol. 3: The Changing Face of Comedy

This event is free of charge and open to the public. Please bring a valid USC ID or print out of your reservation confirmation, which will automatically be sent to your e-mail account upon successfully making an RSVP through this website. Doors open at 6:30 P.M.