JEM AND THE HOLOGRAMS

Jem and the Holograms 
FREE ADMISSION. OPEN TO THE PUBLIC. RSVP REQUIRED.
Guests are invited to come dressed as their favorite character from Jem and the Holograms. Put together your most creative and imaginative costume that represents everything Jem and the Holograms. Please keep your costumes “G” rated. Costumes will be judged prior to the screening and one grand prize winner with the best costume will receive a special prize.

About Jem and the Holograms 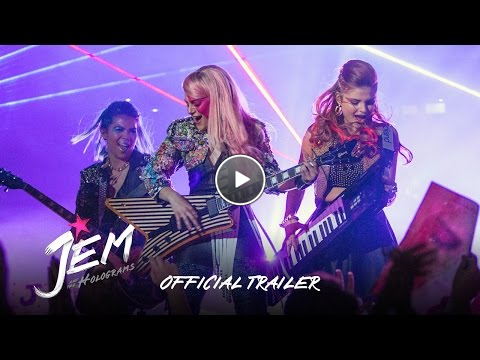 As a small-town girl catapults from underground video sensation to global superstar, she and her three sisters begin a one-in-a-million journey of discovering that some talents are too special to keep hidden. In Universal Pictures' Jem and the Holograms, four aspiring musicians will take the world by storm when they see that the key to creating your own destiny lies in finding your own voice. Jon M. Chu is known for his visually stunning blockbuster films as well as his works across various genres from groundbreaking digital series to commercials and even live concerts. His next film, JEM AND THE HOLOGRAMS, is set for release this October by Universal Pictures and is produced by Blumhouse Productions.  Chu is currently in post-production on NOW YOU SEE ME 2, the sequel to the summer hit. Jesse Eisenberg, Mark Ruffalo, Woody Harrelson, Dave Franco, Morgan Freeman and Michael Caine return to their lead roles as Lizzy Caplan and Daniel Radcliffe join the cast. The film is scheduled to be released by Lionsgate on June 10, 2016.

Chu marked his directorial feature debut with 2008’s STEP UP 2: THE STREETS starring Briana Evigan and Channing Tatum. His use of movement and storytelling earned him a Teen Choice Award, a Breakout Director of the Year Award as well as an MTV Movie Award.  It also became a global hit grossing over 150 million dollars worldwide. Chu followed that up with its’ sequel STEP UP 3D which went on to gross an astounding 165 million dollars worldwide.

For his next film, Chu decided to take on a totally different genre: the documentary.  His film JUSTIN BIEBER: NEVER SAY NEVER was an innovative blend of concert film and biopic sparking an outbreak of Bieber Fever and cementing Justin’s place in pop culture history. The film would become the highest grossing concert themed movie of all time and usher in a new era of music documentary films to follow.

In 2012, Chu tackled his first action movie and biggest production: Paramount Picture’s G.I. JOE: RETALIATION the re-imagining of the popular toy and comic book franchise. Starring Dwayne “The Rock” Johnson and Bruce Willis, the film exploded to #1 at the Box Office and has since grossed over $370 million worldwide putting Chu into a rarefied category of tent pole movie director.  And, then at the age of 33, one of the youngest in that category.

Meanwhile, Chu continues to innovate in the online media space where he was awarded an international Emmy as a digital pioneer.  THE LXD, the world’s first dance adventure series, was described by AdAge as “the most beautifully filmed, elaborately staged web series in the history of the medium”. Chu’s Legion of Extraordinary Dancers have performed at the OSCARS, on So You Think You Can Dance and even have one of the most watched TEDtalks ever. Additionally Chu’s Premium YouTube Network DS2DIO (Dance Studio 2.0) has over 240,000 subscribers, and Jon personally has over 725,000 Twitter and Instagram followers.  Chu also directed the music video for Justin Bieber’s “Beauty and a Beat” which has over 500 million hits and his musical “Click!” commercials for Microsoft’s SURFACE tablet have become an anthem for the new face of the company. This year, Chu was awarded a CLIO for his VIRGIN AMERICA “SAFETY DANCE” video which is played on every Virgin America flight across the country. The video went viral and has over 10 million hits and counting.

As the youngest of five children from Palo Alto, California, Jon M. Chu continues to use the influences of his childhood (family, technology, music and movement) to tell stories that connect with audiences around the world.

A native of Vancouver, Canada, Ryan Landels graduated from the University of Southern California with a degree in Cinema-Television Production. It was there that he wrote and directed his short film The Midnight Express - a modern-day fairy tale that won an Audience Award at the Slamdance Film Festival and was featured in the National Gallery of Art in Washington, D.C. He began his career in development and production with filmmaker Stephen Sommers before moving into writing and directing full time. Landels served in both of these capacities on three seasons of The LXD - a Hulu series from Paramount Digital that was created by Jon M. Chu. That led to him writing and directing Game On 3D, a family-friendly short that Paramount Pictures gave a theatrical release with the director’s cut of Justin Bieber – Never Say Never. Jem and the Holograms is his first produced studio feature. He currently has projects in development with Universal, Blumhouse and Will Packer Productions.

Couper Samuelson is the President of Feature Films at Blumhouse Productions. Blumhouse, which has a first-look deal with Universal Pictures, has produced the highly-profitable Paranormal Activity, The Purge, Insidious and Ouija franchises which have grossed more than $1.4 billion worldwide. Blumhouse's model began with the original Paranormal Activity, which was made for $15,000 and grossed close to $200 million worldwide, making it the most profitable film in Hollywood history. Blumhouse’s award-winning projects include The Normal Heart and Whiplash, the latter of which he incubated from a Blumhouse-produced short film to the lowest-budget feature film in Hollywood history to win three Oscars. In addition, this year he shepherded the critically acclaimed thriller THE GIFT which was the directorial debut of Joel Edgerton and the pathbreaking supernatural thriller UNFRIENDED which grossed nearly $35m in the US on a budget of $1m. Samuelson began his career at Mark Cuban's 2929, where he co-produced movies including James Gray's We Own the Night and Two Lovers, both of which were nominated for the Cannes Palme d'Or.

She is best known for her dramatic lighting and powerful camera movement on Paramount’s dance themed web series The LXD and Hulu’s Tainted Love (Orlando Jones and Eric Roberts). Ad Age described The LXD as “by a wide margin, the most beautifully filmed, elaborately staged web series in the history of the medium.”

Alice is also in post-production for Girl Flu, directed by Dorie Barton and starring Katee Sackhoff. She recently completed horror movie Apparition, directed by Quinn Saunders, and the documentary Sweethearts of the Gridiron: An American Story, which chronicles the history of the Texas Rangerettes, the nation’s first female cheerleaders.

Highlights of her previous work include official selections and premieres at film festivals, including Tribeca Film Festival (Roots in Water, directed by Domenica Cameron-Scorsese), Cannes Film Festival (The Bake Shop Ghost) and Sundance Film Festival (Pretty Dead Girl). Other past films such as One Fall and American Flyer (Showtime) can be seen on Netflix. She has also worked on music videos including Justin Bieber's Santa Claus is Comin’ to Town, which was shot in 3D and can be seen at the beginning of Sony Picture’s Arthur Christmas.

Timothy Dowling is a graduate of the School of Theatre at the University of Southern California. As an actor he was in the films: The Beautician and the Beast, Dr. Benny, and Terminator 3. As a screenwriter he was named one of Variety's Ten Writers to Watch and listed last year in Fade In's Top 100 People In Hollywood. He has written the films Role Models, Just Go With It, and This Means War. As well as the upcoming Pixels directed by Chris Columbus and starring Adam Sandler, Peter Dinklage and Josh Gad. And Another Midnight Run starring Robert De Niro. Timothy is also on the Board of the USC School of Cinematic Arts as well as being their representative on the USC Alumni Board of Governors. In 2012 he proudly donated a Urinal to the School that bears his name.

This screening is free of charge and open to the public. Please bring a valid ID or print out of your reservation confirmation, which will automatically be sent to your e-mail account upon successfully making an RSVP through this website. Doors will open at 5:30 P.M.