Movies We Love, USC Comedy at the School of Cinematic Arts, Alamo Drafthouse, and Sony Pictures, invite you and a guest to a special retrospective screening of 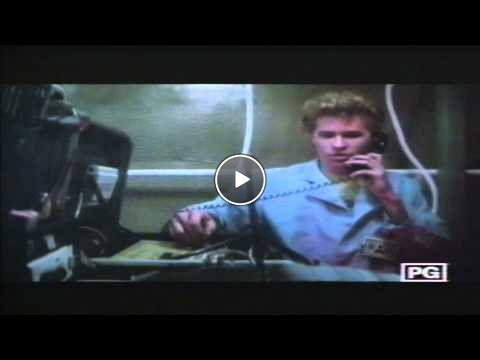 Martha Coolidge directed this comedy taking place at fictional Pacific Tech, concerning incoming freshman Mitch (Gabe Jarret), a high school student whose Science Fair project made important inroads into laser beam technology. Mitch has been recruited by famed physics professor Hathaway (William Atherton), who asks Mitch to work in his laboratory. On campus, Mitch becomes roommates with the brilliant Chris Knight (Val Kilmer), legendary as the smartest freshman in the history of the college; but now, as a senior, he is less interested in his studies and more interested in having fun. It turns out that Hathaway is enlisting his students, unbeknownst to them, as a slave labor force to do research in developing a state-of-the-art laser device for the Defense Department (he uses his government grant funds to build a house). But Chris and Mitch begin to suspect that something is amiss with Hathaway's project.

Ranked as one of the “Top 100 Movie Stars of All Time,” Val Kilmer burst onto the Hollywood scene at age 24 as rock star Nick Rivers in the Zucker-Abrahams-Zucker spy spoof, Top Secret. He starred in the cult classic Real Genius, then rocketed to international stardom playing the “Iceman” in Top Gun opposite Tom Cruise; rock legend Jim Morrison in Oliver Stone’s The Doors; and Doc Holliday in Tombstone. Other iconic roles include the title role in Batman Forever and Simon Templar in The Saint. He headlined Michael Mann’s classic crime drama Heat with legends Robert De Niro and Al Pacino, channeled Elvis Presley in Tony Scott’s True Romance and costarred with Marlon Brando in The Island of Dr. Moreau.

Kilmer’s versatility as an actor can be credited to his dedication to fully explore and inhabit every character he plays, and to his now-famous ability to disappear, chameleon-like, into a role. A talented musician, he learned to play guitar for Top Secret and did all his own singing in The Doors.

Kilmer graduated from Julliard, where, when he was 17, he was the youngest actor ever accepted to the Drama Division. An accomplished stage actor, he made his Broadway debut in the 1983 production of Slab Boys with Sean Penn and Kevin Bacon. He appeared in Joseph Papp’s Delacorte Theatre productions of Henry IV: Part One; As You Like It; Hamlet (in the title role); and ‘Tis Pity She’s A Whore. He starred in the Max Azria produced musical The Ten Commandments as Moses at the Kodak Theater in Los Angeles. In 2005, he starred on London’s West End in Andrew Rattenbury’s stage adaptation of The Postman Always Rings Twice.

Mr. Kilmer is currently developing a film about the relationship between Mary Baker Eddy, founder of the Christian Science Church, and the great writer Mark Twain, Mrs. Eddy’s greatest critic— a quirky, tender, tragicomic portrait of two contrasting lives, set during America’s Gilded Age. With the extraordinary dedication to research and character development that has become his trademark, Kilmer is workshopping a one-man show about America’s greatest storyteller as part of the writing process. "There's really no way of creating the role of Mark Twain without being onstage,” Kilmer told the Hollywood Reporter. “He was a speaker, first and foremost; he did it before he was a famous writer."

In addition to being an actor, singer and writer, Val Kilmer is a poet and visual artist. He is an ardent advocate for Native American affairs, environmental protection and veterans’ rights. He supports Habitat for Humanity and the international disaster relief organization, Americares.

Martha Coolidge broke through several ceilings to become the award winning, internationally respected director she is today.  Obstacles that held back other women spurred her forward. Her passion for storytelling, moving the camera and performance shines through in her work.  A consummate filmmaker, she’s known as an “actor’s director.” Robert Duvall, Halle Berry, Nick Cage, James Gandolfini and Laura Dern, are just a few who have won praise, awards and advanced their careers in her hands. She has directed studio and indie features, television, and cable, and also written and produced, in both comedy and drama.

Her newest film, to be released in 2017, is an epic love story titled MUSIC, WAR & LOVE starring Adelaide Clemens, Stellan Skarsgard, and introducing Leo Suter. It takes place in Poland and Germany before, during and after WW II.  Two music students fall in love and are separated by the Nazi invasion. Their years’ long struggle to find each other reveals many unknown aspects of the war, and the transcendent quality of their relationship.

Coolidge’s comedies VALLEY GIRL and REAL GENIUS put her on the map, launched the careers of Nicholas Cage and Val Kilmer and established her reputation for having a great eye for casting. Two of her award winning dramas INTRODUCING DOROTHY DANDRIDGE and RAMBLING ROSE, led Coolidge and her actors to new levels of success. She launched Halle Berry toward her Oscar by guiding her to an Emmy, a Golden Globe, SAG award and IMAGE award for her performance in DOROTHY DANDRIDGE. In all, DOROTHY DANDRIDGE won 5 Emmys, plus nominations for Coolidge and Klaus Maria Brandauer, and one of Coolidge’s 3 Best Director nominations at the DGA. Laura Dern and Diane Ladd each received Oscar and Golden Globe nominations for RAMBLING ROSE, which also won three IFP SPIRIT AWARDS, including Best Director and Best Picture for Ms. Coolidge, and Best Supporting Actress for Ms, Ladd.

In 2002, Ms. Coolidge was elected the first woman President of the Directors Guild of America.  She served as the Chair of the Creative Rights Committee for ten years and initiated the Guild’s program to improve employment for women and minorities.  She won the Robert Aldrich Award for distinguished service to the Guild in 1998.  An avid horsewoman, Ms. Coolidge lives in Los Angeles and is married to award winning Production Designer James Spencer, and they have one son.