Outside the Box [Office] and True-Walker Productions, Inc.
Invite you and a guest to a special screening of 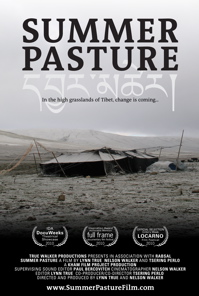 Directed and Produced by Lynn True
and Nelson Walker

Followed by a Q&A with Lynn True
and Nelson Walker

FREE ADMISSION. OPEN TO THE PUBLIC.
MAKE A RESERVATION

“A remarkably intimate docu(mentary) woven out of tradition and change…” - John Anderson, Variety

2010 IFP Gotham Awards Nominee:
"Best Film Not Playing at a Theater Near You"

Summer Pasture is a feature-length documentary about a young nomadic couple living with their infant daughter in the high grasslands of eastern Tibet. Filmed during the summer of 2007 with rare access to an area seldom visited by outsiders, Summer Pasture offers an unprecedented window into a highly insular community and a sensitive portrait of a family at a time of great transition. Locho and his wife Yama live in Dzachukha, eastern Tibet – nicknamed "5-most" by the Chinese for being the highest, coldest, poorest, largest, and most remote area in Sichuan Province, China. They depend on their herd of yaks for survival, just as their ancestors have for generations. In recent years however, Dzachukha has undergone rapid development, which poses unprecedented challenges to nomadic life.

Summer Pasture evolves as an intimate exploration of Locho and Yama's personalities, relationship, and the complicated web of circumstances that surrounds them. Over its course we witness their travails with illness, infidelity, and the dissolution of their community. In the face of mounting obstacles, Locho and Yama gradually reveal the personal sacrifice they will make to ensure their daughter's future. Through its subtle observation of Locho and Yama's character, Summer Pasture provides a deeply personal account of what it means to be a nomad in a swiftly modernizing world, and a universal story of family survival. 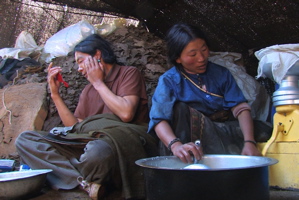 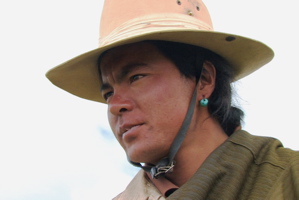 Summer Pasture is a collaborative project, initiated by American filmmakers Lynn True and Nelson Walker who partnered with emerging Tibetan filmmaker Tsering Perlo. A lifelong resident of Kham, Perlo grew up in the nomadic areas depicted in the film and granted our team rare access to film in a community seldom visited by outsiders. Our aim was to create a film that honestly and intimately shares the everyday challenges and experiences of nomadic life, and in doing so, offer a unique alternative to the abundance of purely religious or politicized films about Tibetans.

Due to the difficulties of filming in Tibet, there are relatively few films that depict the perspectives of local Tibetans. The overwhelming majority of Tibet-related films tend to focus on the Tibetan Diaspora, and often lead viewers (even if unintentionally) to equate the exile experience with that of Tibetans living in Tibet.

Summer Pasture offers viewers a rare opportunity to see Tibet from the inside. Locho and Yama were extraordinarily generous in sharing their lives with us. We are grateful for their honesty and compassion, and as filmmakers, we feel compelled to treat their story with the same open-heartedness and respect. Our aim is to find the moments of drama and humor that permeate Locho and Yama's daily lives. By juxtaposing these moments with their thoughts and reflections, we gradually arrive at a more nuanced understanding of the broader circumstances shaping their reality. Though Locho and Yama's challenges may be unfamiliar to many viewers, their charm and sincerity transcend cultural difference, and remind us of our shared qualities as human beings.

Lynn True is a New York based filmmaker and editor with a particular interest in nonfiction storytelling. After growing up in South Korea, India, Chicago, Washington D.C., Arizona's Hopi reservation and suburban Oregon, Lynn settled in New York City. She received a joint degree in Urban Studies & Architecture from Brown University and began her film career as an assistant editor at NBC News and PBS. She has since gone on to make independent films including iThemba|Hope (Sundance Channel, 2005) and Lumo (Student Academy Award winner, PBS's P.O.V. series, 2007). Lynn is also an independent film programmer at New York's Maysles Cinema in Harlem where she and Nelson Walker are co-founders and directors of the Tibet in Harlem and Congo in Harlem film festivals.

Nelson Walker began his career working on documentaries for Discovery Channel, History Channel, and PBS's NOVA. His directorial debut, iThemba|Hope – a documentary about an HIV+ choir from South Africa – aired on Sundance Channel in 2005. Nelson has worked extensively in Tibet, as a visiting instructor at Tibet University in Lhasa and contributor to the Tibetan & Himalayan Library. His most recent film, Lumo – about a young Congolese woman recovering from a traumatic fistula – won a Student Academy Award for Best Documentary, the President's Award at the Full Frame Film Festival and aired nationally on PBS's P.O.V. series in 2007. Nelson holds a B.A. from Brown University and an MFA in Film Directing from Columbia University.

This screening is free of charge and open to the public. Please bring a photo ID or print out of your reservation confirmation, which will automatically be sent to your e-mail account upon successfully making an RSVP through this website. Doors will open at 6:30 P.M.