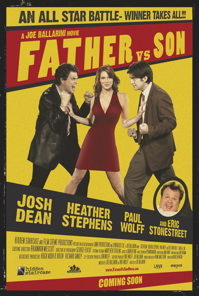 FREE ADMISSION. OPEN TO THE PUBLIC.
MAKE A RESERVATION


About Father vs. Son

Jerry moves in with his depressed 28 year old son, Grant, in order to re-live his youth and hit the Los Angeles dating scene with a vengeance after Jerry's wife runs off to Mexico with her agile Krav Maga instructor. However, when both men fall in love with Darlene, a mysterious stripper, the screwball battle begins between father and son. 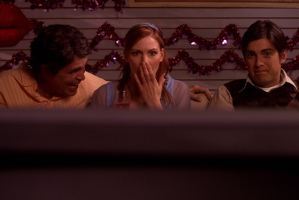 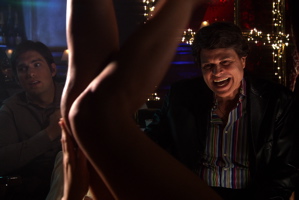 Joe Ballarini graduated from the USC School of Cinema Television Director's Program, ’99. He was the second Unit Director and Screenwriter DANCE OF THE DEAD  for Ghost House Entertainment and Bleiberg Entertainment. He wrote the science-fiction-comedy MAINTENANCE for director McG at Warner Brothers Studios and  the animated comedy READY, SET, SLOW for Dreamworks Animation. He was commissioned to write the remake of THE BLOB for Warner Bros and producer Jon Peters. He is attached to direct his original comedy F+, which was purchased by MGM. He is attached to direct DITCH DAY at 20th Century Fox, from a co-written screenplay by Adam Sztykiel. He directed a series of nationally broadcasted Honda Element commercials. Joe was commissioned to adapt the book series THE HOLLOW pilot for ABC Family Network. He wrote fantasy adventure WITCHHUNTERS for New Regency Entertainment with Dave Meyers attached to direct. His original screenplay THE NATIVITY was purchased by New Regency. His original comedy spec, THE SPY NEXT DOOR was purchased by Miramax. Directed the 35mm short film, NUCLEAR FAMILY, nominated for the Student Academy Award with Producer Michael Huffington. At age 10 - 13, Joe acted in over 20 national commercials, video series, and public service announcements. He is left-handed. He is currently writing THE LEGENDARY MCCLOUDS for Charlize Theron and an untitled haunted adventure for producer Jerry Bruckheimer.

Paul Wolff is a writer, actor, producer and screenwriting professor at the University of Southern California School of Cinematic Arts. Before joining the faculty of USC, Wolff had a prolific career in television which spanned nearly three decades.

Paul Wolff first entered the television scene as a writer in the late 1970s on the TV series, Family. He later went on to write for such TV shows as Little House on the Prairie, Family Ties, Fame, Remington Steele starring Pierce Brosnan and the number one hit Home Improvement. In addition to being a successful television writer, Wolff also achieved success through his career as a television producer and show runner. He created, produced, and acted as show runner on the short-lived yet critically acclaimed series, Annie McGuire, starring Mary Tyler Moore. In addition, he served as a producer and director on the early 1990s series Life Goes On.

Paul Wolff was one of the founders of the Unica Film Collaborative, an experimental film group that focuses on the "process" of filmmaking, rather than the product. Unica's first feature film, Blue in Green, was chosen by Los Angeles Times film critic Kevin Thomas to screen at the LA Cinematheque's Alternative Film Festival. In 2007, as an actor Wolff played the role of Prospero from Shakespeare's The Tempest at the Egyptian Arena Theatre's Shakespeare Festival.

Michael Huffington has a distinguished career as a dedicated public servant, successful business executive and generous philanthropist whose charitable activities span the globe. As a public servant, he was at the forefront of efforts to improve educational and healthcare opportunities for children. In 1998, he was the co-chairman of a successful California ballot initiative to raise the price of cigarettes by 50 cents a pack, providing hundreds of millions dollars of tax revenue to be used every year to improve healthcare for children under the age of six. He served as a member of the U. S. House of Representatives from 1993 to 1995. In 1993 and 1994, he donated his entire Congressional salary to programs that would help the children who lived in his Congressional district. And prior to that was appointed Deputy Assistant Secretary of Defense for Negotiations Policy by President Reagan. He is the recipient of the Secretary of Defense Medal for Outstanding Public Service.

Huffington is a film producer. From 1991 to 2000 he was the co-owner of Crest Films Limited, a full-service film production company known for its Emmy Award-winning commercials, documentaries, adventure films and work on behalf of non-profit organizations. He was a backer of the CNN series Earthbeat, a groundbreaking environmental series about the earth's eco-systems and the need to protect them. He gave financial support to a foundation organized by James Ivory and Ismail Merchant to promote a program to restore the films of the great Indian director, Satyajit Ray. He is presently working on three feature films and a documentary.

An award winning filmmaker, Brian recently finished producing and editing the feature films FATHER VS. SON, a Christmas comedy which won the Houston Critics Society's Award for Best Premiere at Houston WorldFest and the thriller GOLDEN EARRINGS, winner of the Audience Award for Best Horror Film at the IndieSpirit Film Festival. Other producing credits include DANCE OF THE DEAD, released by Sam Raimi's Ghost House Underground through Lions Gate Films and the wb.com horror series BLOOD CELL.

His screenplay for the drama SARA'S SONG, which was co-written with Natalie Plant, was chosen as an official selection at the Beverly Hills Film Festival. Directing credits include the award winning short film LEARNING TO FLY and the short film CHOICE, which was featured on THE HUFFINGTON POST.

Brian is originally from Minneapolis MN, and a graduate of the University of Southern California's School of Cinematic Arts. For more information visit www.FilmCrewe.com

George Feucht has found himself behind cameras since he was 8. He ultimately followed this passion to a degree from the University of Southern California's School of Cinematic Arts with an emphasis in Cinematography from the Production Program. Recent film credits include DANCE OF THE DEAD, directed by Gregg Bishop; ENIGMA, directed by Jason and Matt Shumway and Fernanda Cardoso's BLOMINGTON.

French recently directed the feature El Súperstar: The Unlikely Rise of Juan Francés, which comes out on DVD the 18th.

The School of Cinematic Arts invites you to an exciting free screening series featuring a dynamic selection of new feature films by SCA alumni and faculty throughout the Spring 2011 semester. All screenings and events will be free of charge and open to the public, although we do ask for an electronic reservation for each screening, which can be made through the website for each individual screening. Many screenings will be overbooked to ensure that capacity is met in the theater. Some screenings will be run from digital sources.

This screening is free of charge and open to the public. Please bring a photo ID or print out of your reservation confirmation, which will automatically be sent to your e-mail account upon successfully making an RSVP through this website. Doors will open at 7:00 P.M.