Outside the Box [Office] presents: JCVD 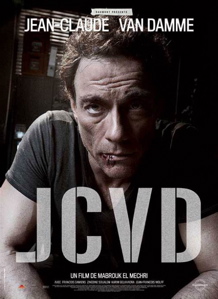 When the life of Jean-Claude Van Damme collides with the reality of a hold-up in Brussels, Belgium, suddenly the huge movie star turns into an ordinary guy, filled with fears, contradictions and hopes. How can he be up to the legend he has built? What can a film hero do when the gun pointed to his temple isn't charged with blanks? JCVD finds himself at the turning point of his "hero" life.

In French and English with English subtitles.

DIRECTOR'S STATEMENT: APPEARANCES CAN BE DECEIVING

JCVD is a film about perception. How do we perceive public figures when we cross paths with them in real life, when all we know about them comes from the media?

The life of Jean-Claude Van Damme is a perfect example. Once a symbol of the pursuit of the American dream (as he leaves Brussels), he went on to achieve worldwide celebrity status only to fall into a life of excess: drugs, sex and an eventual fall from grace. 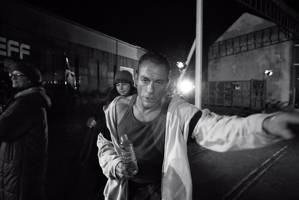 My intention in making this film was not to produce a true-to-life biopic of the "Fred Astaire" of karate. Far from it. This was an excellent opportunity to create a whimsical biography showcased in a foolproof setting, that is, within the genre – of a hostage and cop movie. This allows the actor a rare and exceptional stage on which to play and to perhaps clear up a few stories about his life and career.

Sergio Leone held that directing is as simple as deciding to place the camera at a certain mark, on a certain angle as opposed to choosing any other mark or angle. In structuring the film along a non-linear timeline, the viewer receives a relatively objective presentation of facts (through the character Bruges), later going through the same scenario but this time through JCVD’s point of view. This illustrates what Leone suggested about directing, and above all draws the viewers' attention to the theme of perception. Our initial understanding of JCVD during the first hour of the movie takes on a completely new meaning when seen from his perspective.

The cult of celebrity, which can create a false sense of intimacy between the star and the public, is fascinating from this point of view. The chaotic life of JCVD, his questionable values, his publicly played out married life and the unique genre in which it's presented (sometimes laughable for some people), are all delightful elements that allow this film to plot its course between comedy and drama. 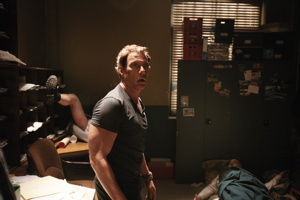 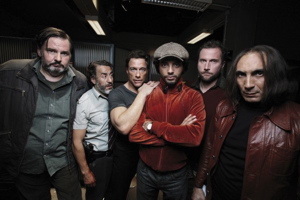 ABOUT OUTSIDE THE BOX [OFFICE]

Outside the Box [Office] is a new showcase for upcoming releases highlighting world cinema, documentary and independent film titles. Recognizing a need for greater diversity on campus, the series will draw from around the globe to present movies that may challenge, inspire or simply entertain. The weekly screenings will be on Wednesday nights in the new George Lucas Building, Screening Room 112, although there will be occasional weekend events and added screenings depending on filmmaker availability. Most screenings will not be followed by a Q&A, given the lack of available guests. Because SCA 112 is an all-digital venue, films will be screened from a variety of digital formats.

ABOUT CHECK-IN & RESERVATIONS
This screening is free of charge and open to all USC students, faculty, staff and alumni. The theater will be OVERBOOKED to ensure capacity and the RSVP list will be honored on a first-come, first-serve basis, with no reserved seating. Please bring a photo ID or print out of your reservation confirmation, which will automatically be sent to your e-mail account upon successfully making an RSVP through this website. Doors will open at 8:15PM.

ABOUT PARKING
The USC School of Cinematic Arts is located at 900 W. 34th St., Los Angeles, CA 90007. Parking passes may be purchased for $8.00 at USC Entrance Gate #5, located at the intersection of W. Jefferson Blvd. & McClintock Avenue. We recommend parking in outdoor Lot M or V, or Parking Structure D, at the far end of 34th Street. Please note that Parking Structure D cannot accommodate tall vehicles such as SUVs. Metered street parking is also available along W. Jefferson Boulevard.