Professor Serna is considering doctoral students interested in historically informed approaches to silent cinema including non theatrical media and transnational circuits of distribution and reception, the history of cinema Latin America particularly the histories of  distribution, exhibition, and production cultures, and critical approaches to Latinx Media in the US. She has worked with students whose interest is focused on the US context, including, for example, technological and legal histories of Hollywood and is open to those sorts of projects as long as they are clearly historical in their orientation.

Recently directed dissertations include the winner of the 2021 SCMS dissertation award, Peter Labuza's "When a Handshake Meant Something: Lawyers, Deal Making and the Emergence of New Hollywood." (2020)

Laura Isabel Serna joined the faculty of the Critical Studies Division in 2010.  She is the author of Making Cinelandia: American Films and Mexican Film Culture (Duke University Press, 2014).  Making Cinelandia is a historical account—based on deep research in multiple archives in both the United States and Mexico—of the circulation, presentation, and reception of films and film culture in Mexico during the late teens and early 1920s, a moment when U.S. films dominated Mexican movie screens on both sides of the border.   She has published essays on a range of topics in Mexican film culture during the silent era including border film production, censorship and nationalism, and regional film cultures in journals such as Aztlán: A Journal of Chicano Studies and The Americas: A Quarterly Review of Inter-American Cultural History and edited collections including Silent Cinema and the Politics of Space (2014) and Land of Necessity: Consumer Culture in the U.S.-Mexico Borderlands (2010).    She has also published essays on Latino Stardom and the commercial practices, specifically the translation of intertitles, that enabled early Hollywood to reach global audiences.

Professor Serna received the PhD from Harvard University and her B.A. from U.C. Berkeley. Her research has been supported by numerous grants and fellowships including a prestigious Andrew W. Mellon Postdoctoral Fellowship and a Fulbright-García Robles Fellowship.  Trained as a cultural historian he primary research interests are the cultural and industrial history of cinema in Latin America during the silent period, Latino/a media cultures, marginalized labor in the Hollywood system, and the relationship of nationalism to the formation of film cultures. She is currently conducting research for her second monograph, tentatively titled On the Last Steamship:  Silent Film Distribution and Commercial Culture in the Spanish-Speaking Caribbean, which examines the social and commercial networks that facilitated the importation of films from first Europe and then the United States in the greater Caribbean region.  She is also working on a series of essays about early Hollywood’s techniques for producing Mexico and Mexicans on screen not merely in order to theorize “brownface” as a cultural and political practice.

She regularly teaches courses on international silent cinema, Latino/o Media, Latin American and Mexican Cinema, and film history.  She is also a member of the editorial board of the new online journal International Women’s Media Histories (University of California Press) and the advisory board of the Academy of Motion Pictures Arts and Sciences’ Pacific Standard Time: LA/LA project:  “Latin America to Hollywood: Latino Film Culture in Los Angeles, 1967-2017,” an exhibition and conference program that will be mounted in 2017.  You can read more about her research, teaching, and public appearances here.

“Mexican Film Culture on the Edge of the Caribbean: Silent Cinema in Yucatán,” Film History (forthcoming, 2015)

“Translations and Transportation: Toward a Transnational History of the Intertitle.” In Silent Film and the Politics of Space, edited by Jennifer Bean et al., 121-145. Bloomington, IN: Indiana University Press, 2014. 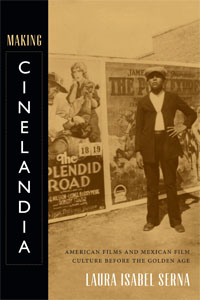