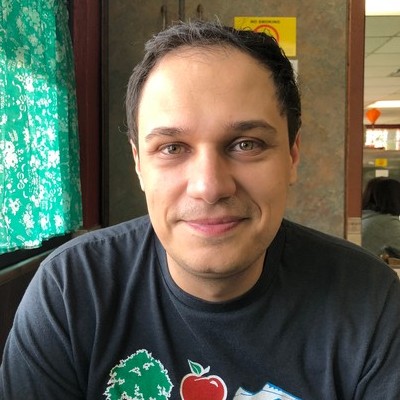 Hi everyone! My name is George Carstocea and I am an Assistant Professor of Practice of Cinematic Arts. I have been teaching "Intro to Cinema" and a few other classes in the Cinema and Media Studies department for the past three years, in a limited-term appointment. I watch too much TV, and almost enough films. Aside from rewatching a lot of Always Sunny and 30 Rock as always, here are a few interesting things I’ve watched recently:

Nope (2022) - When the inflatable-wavy-arm-guy army starts deflating, just like Muybridge’s shutters actuated as Leland Stanford’s horse trotted by almost 150 years ago, you know you’re watching a masterwork. This meditation on racism, scopophilia, hubris, and exploitation in the creative industries, hiding under the mantle of a straightforward creature feature, and brought to life by effortless performances from Keke Palmer, Daniel Kaluuya, Brandon Perea, and Steven Yeun, might be Peele’s strongest work yet. Pair it with The Rehearsal, and let me know afterwards how comfortable you feel with spectacle.

The Rehearsal (2022) - Nathan Fielder’s work has always unsettled me, and this is the best I’ve seen from him. What if you could rehearse difficult life moments and conversations ahead of time? Fielder takes this question to its extreme in six episodes, while foregrounding the discomfort we should always feel when watching reality TV exploiting its participants.

Reservation Dogs (second season, 2022) - It’s dispiritingly rare to see a show develop its own visual style. Instead of canned angles, HDR sheen, and color grading reduced to slapping a LUT on it and calling it a day, Reservation Dogs feels as if every visual decision was tailor-made for the moment it is expressing. And although the humor might reel you in, it’s the melodrama of the mundane that will keep you hooked - this show can make you empathize deeply with its characters, without feeling exploitative.

This Fool (2022) - I used to go to the weekly show that Jake Weisman and Matt Ingebretson ran at the Downtown Independent about ten years ago, so I was intrigued to see their creator credit (alongside Pat Bishop and series lead Chris Estrada) on this new Hulu sitcom. Set in South L.A., and focused on a Homeboy Industries-like rehabilitation organization, it’s funny, smart, and has a lot of heart. Did I mention that Michael Imperioli plays a depressed priest?

Carter (2022) - If you want to see a movie that uses the single-shot gimmick for kinetics instead of illusion (you can easily see most of the stitching, but it’s all in the service of action), check out this new Korean action flick on Netflix. Watch if you like Mad Max, John Wick, Johnny Mnemonic, the Resident Evil movies, and the like. Don’t watch if hyperviolent action bothers you.

Also deserving of mention: Twin Peaks: The Return, which I am finishing for a third time with a group of students; Severance and Loot on Apple TV; Abbott Elementary and American Auto, from last year’s batch of network sitcoms; The Righteous Gemstones, which should get the attention Succession is getting; Prey, the best Predator movie since the original; and Strahinja Banovic / As Far As I Can Walk, the best movie I saw in this year’s Transylvania International Film Festival, restaging a Serbian national legend in the context of contemporary refugee communities at the edge of Europe.