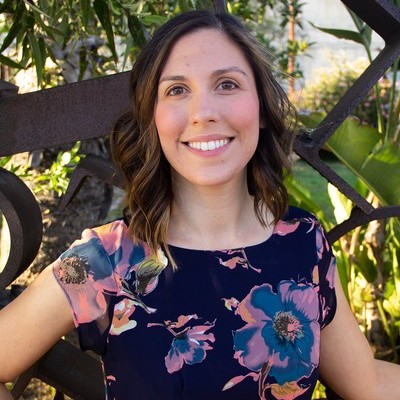 Learn more about the Peter Stark Producing Program
Visit Website »
1. What interests you the most about your specific division or program at SCA?
Coming from a background in pharmaceutical advertising, then switching careers to produce video graphics/animation for film, tv, theater, and live events – I needed a program that could jumpstart my new pathway towards full-scale film/tv producing. My intention when I started was to learn to be a hands-on, creative producer from development through distribution – but I was pleasantly surprised to learn that my cohort included students who were just as passionate about being writers, directors, agents, etc. The Stark Program is unique in that I’m not only learning how to produce, but I’m gaining a well-rounded skill set in production, writing, pitch development, business, finance, independent/studio/agency models, and more.
2. Why did you choose SCA?
With a small cohort of 24 students per year taking every class together, it’s an incredible opportunity to form close bonds with peers who will all be entering the industry together – providing emotional support and a broader network for opportunities. While USC as an institution can be dauntingly large, our cohorts are a tight-knit community. On top of that, The Stark Program has a legacy and merit that can open doors in the industry along with an alumni network always willing to take meetings to support the new Stark family.

3. What has been your biggest challenge so far in your time here?
I tend to over-commit myself to projects outside of classwork, which is especially hard not to do being surrounded by so many talented students at SCA! Time management has been the biggest challenge, but I’ve learned to decide between having internships or extracurricular projects each semester to allow for some balance.

4. What has been your biggest success?
I’m so fortunate to have found an MFA Production Thesis film to produce during my two years here, which expanded my network and knowledge immensely being able to see every step of creating an advanced short film – from working with SAG actors, writing grant applications, going through USC’s greenlight process, putting the creative team and crew together, financing/fundraising, filming under COVID protocols, and completing all the sound/VFX/color and mastering work. It’s been an invaluable experience, and I highly recommend that Stark students interested in producing make a point to go after these opportunities.

5. Is there a project you are working on (or have completed) that you're especially proud of?
The thesis project I’ve been working on since Fall 2019 (originally planned to shoot March 2020 and postponed until Summer 2021) is called WISH UPON A DISCO BALL, from the incredible mind of writer/director Anabel Inigo. It’s a disco musical about two sisters who find out what it means to grow up – and how that doesn’t mean growing apart. We’re still in post-production, and would appreciate your support by following, liking, and donating to our finishing funds if you’re able to: https://www.instagram.com/wishuponadiscoball/

6. How has SCA prepared you so far for the kind of career you want to have?
More than anything, Stark has prepared me with a baseline of industry knowledge and connections that have allowed me to be strategic and informed when going after opportunities. Before I came to Stark, I wasn’t sure of all the different entry points and job titles on the path to producing – and it’s different for everyone – but I feel much more confident in starting strong wherever I land.

7. What advice do you have for prospective students looking to apply to SCA?
When I applied, I didn’t have a “typical” film student resume and was nervous that not having written a script or personally shot a film before would hinder me. But it turns out, SCA and Stark care about passionate storytellers and having a vision and voice more than anything. Take your time to assess the kinds of projects you want to support, write, or produce and put all your enthusiasm into your application.