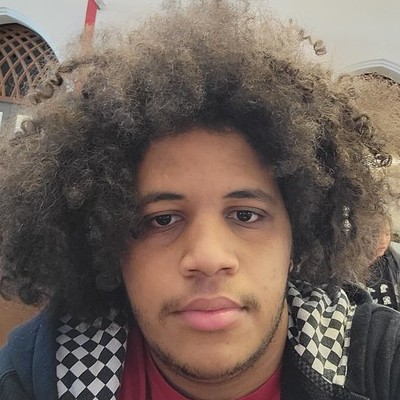 Where Ryan and the rest of TeamPlasmaFish upload their games.
Visit Website »

What are your name, division, and expected year of graduation?

I am Ryan Beltré Wilson, I am in the IMGD department, and I’m going to graduate in May of 2025.

Alright. So why did you want to study interactive media and game design?

I feel like interactive media and game design ties together a lot of my interests, because before coming here I did art, music, programming, and also did a bit of game design. And when it comes to making games, all those skills are applicable. So I thought, “why not study in the center of all those skill sets?”

At school like at USC, or at school in general?

I think it means at USC.

At USC? Well, my greatest success is that I have a perfect score in CTIN 190.

The greatest challenge for me is probably getting used to school life, I guess. It’s been like two years since I’ve been in COVID at home, just phoning everything in, and now I’m here, attending school in person, having to wake up early, and having more responsibility and work, and it’s hard getting back into that lifestyle, I guess.

What projects have you worked on that you’re proud of? I think this one is more general than just USC.

More general than USC? Well, I made a soundtrack for a game called Wildsea. It’s a tabletop RPG, so the soundtrack isn’t programmed into the game because it’s a book, but they are using the soundtrack in promotional materials and online. When it comes to USC, I’m making a midterm project where it’s a game made to convey a certain emotion, and I think that I’m doing pretty well on that assignment, and I’m pretty proud of it.

What organizations have you been involved with, since coming to USC, and why did you - if you did - choose to join them?

Yeah, so I’m participating somewhat in MEGA, which stands for Making of Entertaining Games Association; it’s an organization meant to just connect people that are really passionate about game design, and the reason I chose that organization over the other big game design organization is because MEGA seemed more like - chill, I guess. I don’t want to have my class duties and also have to be beholden to another organization in school, or at least not on my freshman year. Then, I thought I could still do MEGA and then it won’t be a super huge deal if I miss a meeting or two and still attend.

That was one I was kind of trepidatious about joining it, because I was afraid of sort of a commitment to it. But isn’t it a lot more informal, really? Because I know it’s - isn’t it game jams?

And then finally, what advice would you give someone who’s thinking about applying to SCA?

My advice is, I guess, don’t worry too much about class rank? Or GPA and that kind of stuff? Like, what you should really be worrying about are your essay and your portfolio. Or at least that’s how I got into SCA, is based off of portfolio work. And I’d say it’s possible even if you have not top ten percent or whatever, because you look at USC and SCA and you’re like “whoa, this school’s so selective!” But I was like sub-top-twenty percent, and I still got in. So just work on your portfolio.