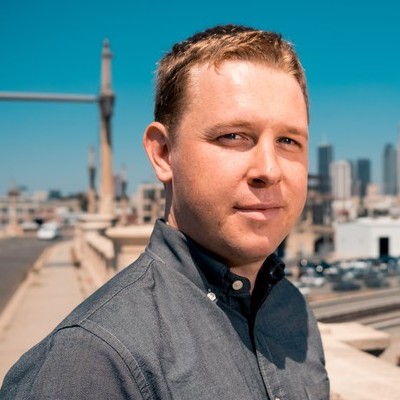 1) What interests you the most about your specific division or program at SCA?

When I decided to return to school after a career in the performing arts, I had many interests in the overall landscape of entertainment business. I was producing events and concerts for The Music Center, so I had a passion for giving platforms to diverse and talented artists. I was also a writer. I had been writing plays and screenplays since I was a teenager but was never able to sustain a career. Lastly, I had an invested interest in the business of entertainment. I founded my own company in 2015 but struggled to expand it. For my graduate school experience, I wanted to learn about the craft of story and filmmaking but also about the tools needed to get film and television made. The Stark Program provides resources to develop all of those skills.

I knew that USC would provide the opportunity to achieve all of my goals through graduate school and afterward. There is a focus not only on craft but also on the realities of entering and contributing to the entertainment industry. While in Stark, I've interned for companies like HBO and Searchlight Pictures, I've taken classes from industry experts, I've produced and written films, and I've met peers and mentors who have helped me develop along the way.

Deciding what I want to do when I leave. The Stark Program provided me with every window into the entertainment industry. I learned the perspectives of executives, producers, agents, writers, and other talent. Examining those perspectives while exploring my own goals was challenging – it forced me to confront who I am and why I wanted to be here in the first place.

4) What has been your biggest success?

Communicating my goals and working hard to achieve them. When I started the program, I made a list of goals and hung it on my wall. Some of those have changed slightly, but for the most part, I've been able to do every single thing I wrote down. Knowing what I wanted from the beginning and working toward it has been incredibly rewarding.

5) Is there a project you are working on (or have completed) that you're especially proud of?

The Stark Program granted me funds to produce a short film this year. I wrote the script and developed it with another Stark producer and a director from the Production division. We wrapped principal photography last week. The story focuses on a young girl who is in an unstable home. A chance encounter with a woman coping with the loss of her son creates an unlikely friendship. It is inspired by the countless women in my life who have empowered themselves and also been selfless for others. We have started the post-production process and plan to screen the film at SCA in May.

6) How has SCA prepared you so far in your career in entertainment?

The school provided me with the tools to talk about any job or experience in the entertainment industry. I had opportunities to interact with and learn from experts at all levels of development, production, business, and post-production. Additionally, there is a focus on internships and career development, which is extremely helpful. I was able to see what it is like at a diverse array of companies. The fact that I was a student from USC was helpful as well; the school's reputation is well-known and, more importantly, well-respected.

7) What advice do you have for prospective students looking to apply to SCA?

Know why it is that you want to study film and television and have a point of view. The most successful of my peers tend to be those with distinct perspectives and specific goals. These filmmakers are the ones that I expect will change the industry for the better and push the craft into new places.

Mitchell Colley is a MFA Student in the Peter Stark Production Program from from Denver, Colorado & New Orleans, Louisiana