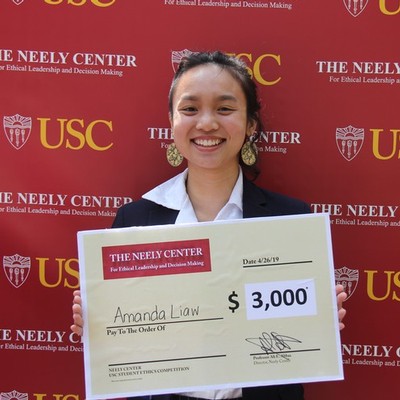 Why SCA?
I honestly chose SCA because it was first on Hollywood Reporter’s Best Film Schools list, and also, when I started to look, I realized I wanted to go to a bigger school that was located in Los Angeles and that had a diverse student body. I was really choosing between USC and Emerson, and I decided that I didn’t want the small college experience (I got that in high school), so I chose here!

How have you found big classes and meeting people?
It’s been great. There are a lot of really smart students at this school. Among the people I’ve met in one of the leadership classes I take (the Warren Bennis Scholars Program) are Fulbright scholars –– meeting them has been really interesting. Some are International Relations, some are Public Policy, so it’s nice to get their perspective on things. Sometimes it can get pretty insular at the film school, where everyone’s, well, really interested in talking about film! It’s nice to talk to smart people, with other interests, and USC has plenty of them.

I understand you were a production major, and then you switched to Cinema & Media Studies?
Well, I had a friend who was considering switching, and they sort of ran through the stuff they didn’t like about the production track, and I agreed. I actually switched out of production the first week of 310… I realized that my vision with the film I was making would’ve been too restricted by the requirements of that class. I wouldn’t have done a good job in five weeks. I did make the film, with my own money (my savings!), but it ended up taking a year to finish. Which is really long, but, I wouldn’t have been able to make it the way I wanted to in 310. I also wanted to pursue other interests not specific to film, and CAMS opens things up a little bit.

On that note, how has SCA and/or CAMS set you up for your career or future pursuits?
One good thing about CAMS is that it does give you leeway to explore research topics that are of your interest. The classes are broad enough that if you wanted to explore something that was not covered in the curriculum, it’d be okay. It got me a lot more interested in thinking about history and the social/cultural context behind film production. When you talk about Media for Social Change, a lot of the impact of narrative is indirect, but at the same time, that indirect-ness can make it very powerful. It’s kind of intangible –– you can’t measure how it psychologically or culturally affects people. I like the idea of combining that affect with Masters in Public Policy, so that you can figure out how not only to influence media policy, but bring in issues of investigative reporting on the socio-political climate into media in a way that people can consume and understand.

Do you have any advice for prospective students –– either who want to come here, or are coming here?
I would say: don’t be afraid to take time to figure out what you really want. There’s a big rush and push, especially now, for younger and younger people to know exactly what it is what you want and to pursue that. But honestly, you’re young, you have time. Figure out your values. That was the biggest thing for me, as it gave me a sense of direction towards what I wanted to do, rather than what I thought I wanted to do.

Lastly –– USC actually does have a lot of opportunities, not just at SCA, but the school as a whole The provost’s office has a lot of programs, they gave me some fellowships to do stuff. If you’re interested in something, there’s people here who will either support you or be interested in it, too.
Do some digging on the internet –– productive procrastination! –– for things you can apply for, and can help you attain what you want and find people to help you get it.

What are you working on now?
I still have to finish a documentary I’ve been working on for a couple of years now!
The Provost’s Office gave me two fellowships to work on and expand a documentary I did in 294. I’ve been doing it for two years to the point where Joe Wallenstein is like, “What’s happening with that? Are you still working on it?” So I should really finish that.

Job applications (like everybody else…), and I’m thinking of continuing this paper (A World Made In Image: Truth and Power in Nonfiction Visual Media”) and getting it published. I have a couple of feature ideas I want to try writing, just for fun.