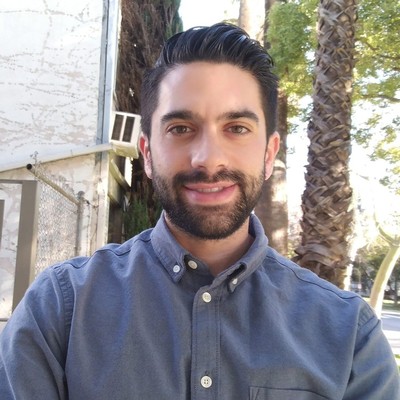 Why did you choose SCA and the Stark Program specifically? My path is a tad unusual. I am a 30-year-old Israeli. I had had a career in intelligence and diplomacy and later in software. But I always wrote and knew eventually I will become a filmmaker. I started in screenwriting school in Israel, but soon realized I wanted to go more global. The Israeli market is amazing and has so many creative productions and incredible talent, but I wanted to establish myself in Hollywood as the starting point. l also realized I wanted to broaden: not just to write, but to produce and direct; and specifically, Sci-Fi Dramas, which are still uncommon in Israel. So, I applied and got into the top film schools in the US (Columbia, Chapman, AFI, and USC (both production and Stark program) specifically for creative producing programs. I was thrilled to get the call from Stark, which was my top priority as it's exclusive in the breadth it covers. I've not been disappointed!

How is the program preparing you for the career you’d like to have? Hollywood, most basically, is a business of commerce. The Stark program gives you a head start into this tough market. It's just like the startup incubator; Stark helps you become a more valuable product. It gives you, on the one hand, the arts and crafts, so we study hands-on production, storytelling and building your own unique taste and voice. On the other, it gives you the commerce skills, so we learn what we need to know about pitching, contracts, what to buy and how to sell, and who are the key players and what are the trends of the industry which is undergoing massive changes now. The Stark "mafia", as we like to call it, is a power amplifier. The people you meet through the program are amazing, starting with our excellent professors, who were also Starkies!, the mentors you are assigned with, and your cohort. The collaborative relationships we are building with the production students, screenwriters and composers will be long-lasting. The Stark experience is a turbo boost on your career path and it's noticeable even in your internships while you're still in school.

What has been your greatest achievement since coming to USC? Wow. I feel I've been so stretched I sometimes can't believe it. I have interned at two amazing production companies and was involved in some projects of which you will eventually hear. I got to prepare pitch decks to the industry's biggest talents and sit in on pitch meetings with world-renowned directors and industry seniors. I even got to meet Mr. Haim Saban, who is a personal hero of mine, so I have the utmost gratitude to my bosses, who allowed me to be a part of it.

I have written a pilot episode for a series I developed which is now is a contender in several screenwriting competitions.

And of course, meeting the stellar faculty and adjunct professors and the guest speakers Stark brings has been extraordinary - people who'd you never think you'd meet in a room in a group as small as 20 people.

What has been your biggest challenge? The number of possibilities you have through SCA and Stark. There are so many things that I want to do, and the school enables you to do,  I just wish I had more hours in my day!

What project(s) are you working on right now? Again, so many! I am about to direct a short film which I also wrote. It is an amazing experience working with my skilled classmates and colleagues. I am excited to see it coming together and we intend to submit it to the festivals circuit on completion. I'm now working on two feature screenplays and two TV pilots. With another Starkie, I'm optioning life rights for another story we want to produce, and the rights for an Israeli book we want to make into a TV series. I'm producing a thesis film of a very-talented director from USC's production program. Through a competition that Stark holds, I hope to get to write-produce with a close classmate of mine another Short. I've learned to do all that in the past six months, so the pace is quite insane.

What advice would you have for prospective Stark students? Don't hesitate. No matter what you currently do, and where you are, if you have a passion to bring stories to life, your place is in Stark.

Know who you are, and what kind of stories you want to make and tell and get ready to work extremely hard. There is a great team here to support you (Thank you Stark office!).

We picked up a saying in my cohort, "We pledge allegiance to the hustle". That's what this business is about. Work hard to make life-changing and world-changing stories. As Larry Turman, our amazing head of program says: a producer makes the film. A great producer, as we all slowly become, makes the film great.