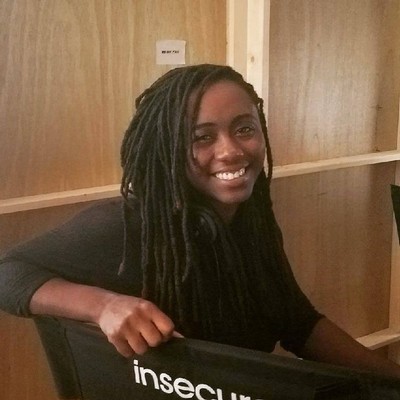 What is your program and expected graduation date? This May of 2019, I will be graduating with my Master of Fine Arts in Film & TV Production. For the past two years I've been studying at USC, learning from world class professors, making films, making friendships, and hopefully setting up future collaborations. I am very happy to be graduating but I will miss all of the great times I've experienced at USC.

When I look over every film I've created with my classmates, I am happy to see my growth as a filmmaker. In addition to school work, I've been active on campus. I've been blessed to serve at the President of the USC African American Cinema Society. In this time we've held many great events open to the community including an Alumni Film Showcase, a Student film showcase, and formed a partnership to attend the world premiere of the films Black Panther & A Wrinkle in Time. Moreover, through developing connections with my mentors, I've had the opportunity to connect with USC Alumni, and showrunner Prentice Penny. He has allowed me to have a set visit on a taping of the show Insecure. Hence, I am very grateful for every minute I've spent at this university. I can honestly say if I didn't attend school here I would be missing out on opportunities that only this school can grant me access to.

What interests you the most about production? My passion is directing and writing. At the age of 13 I fell in love with the art of storytelling and every year since then I've been taking steps to get closer towards to career. It is my dream to direct and write feature films and television shows. I am also interested in eventually becoming a show runner. Writing is important to me because it allows me to create a world and share a message. Writing is also important because it allow me to tell stories that are often left out of mainstream media. Directing is a passion of mine because I love working with actors and collaborating with my crew to bring the idea from the page to the screen.

Your work has allowed you to film in locations such as the Warner Bros. backlot. What can you tell us about this experience? This summer I was very blessed to receive a call from a independent producer/writer, named Armie Hicks. Earlier this year, he saw my work at the S.E. Manley Short Film Showcase. Afterwards, he called me and said he liked my film and my vision as a director. He then asked me to direct a short film he wrote called Summer of Justice. I read the script gladly accepted. The film is about a young woman who challenges the world to stand up and make a change after her fiancé is killed by the police in front of her.On June 2nd, I directed this film at Warner Brothers backlot and I had a phenomenal time. I partnered with industry professionals and also many of my classmates. This was by far the biggest crew I've ever worked with. We shot the film over the course of one weekend. It is our hope that people will see the film and will be inspired to help end police brutality. It was an honor to direct a film at Warner Brothers backlot where many great films and television shows are made.

What in your past has given you inspiration or a unique point of view that you bring to SCA? Originally hailing from Newark, NJ, I am a storyteller who believes we can change the course of the time if we share our knowledge and learn from one another with open minds. It is my hope to use filmmaking as a vehicle to deliver a message that will open the eyes of the masses, bring about awareness for social issues, and positively influence the next generation by subliminally teaching morals and values in entertaining ways.

My voice as a filmmaker is influenced by upbringing in the city of Newark. All my life I’ve been an underdog up against many obstacles fighting for a chance to succeed, so through my work I wholeheartedly enjoy telling stories of “underdogs” who against all odds prevail.


What have been your biggest challenges at USC? The biggest challenge at USC is it is very expensive. You have to not only invest in tuition but pay for your projects and lab fees. However, I know for myself and many students this financial challenge is difficult to overcome. The best thing we can do is remember investing in your project is equivalent to investing in your future, so hopefully in the long run it will pan out.

Another big challenge is not having enough time to fully grasp all of the opportunities that are available. There are often may great classes that overlap each other and sometimes you have to choose. This school offers an abundance of resources and film programs to take advantage of, so the best solution is to prioritize your time and figure out what you want to focus on so that you can make the most of your time here at USC.


Are there any projects you’re working on right now? Where can people find out more about your work? Currently, I am in my final year of my MFA in Film in TV Production at the University of Southern California and I am gearing up to direct my thesis film Blackbird. Our film is a hopeful tale about a woman who works cleaning planes but dreams of being a pilot. Throughout her journey she faces self-doubt, learns to chase her dreams, gets her wings and defies the odds. We have a fabulous crew of students who have partnered with us to make this film possible.

This film was inspired by my grandmother who worked many years cleaning planes to provide for my family. It is also inspired by Bessie Coleman who was the first African American pilot. With this film I pay homage to them. On June 15, 1921 Bessie Coleman received her license to fly. Many moons later on June 15, I was born, so I feel a very special connection to telling this story. In fact I believe, I was born to tell it. I thank God for making this opportunity possible.It is my hope to use this film to inspire the next generation of kids to chase their dreams and dare to be anything they put their minds too.

To find out more about the project and support our fundraising efforts our website is:
www.gofundme.com/blackbirduscthesisfilm

What advice do you have for prospective students looking to apply to SCA? For anyone who is interested in attending SCA I want you to know there is no better program that will fully immerse you into every aspect of production. In addition to all of the latest technology and equipment, this school is very great at fostering alumni connections and mentorship with the faculty.

If you are interested in attending SCA I would advise you to take your time on your application, develop your reel, and also prepare for graduate school. I recommend coming into film school with 4-5 short film scripts already written. Do not get intimidated by the idea of getting into a competitive program. If you really want this, you should try. Also, if you do not get in the first time, apply again and again until you do. Never give up on your dream!