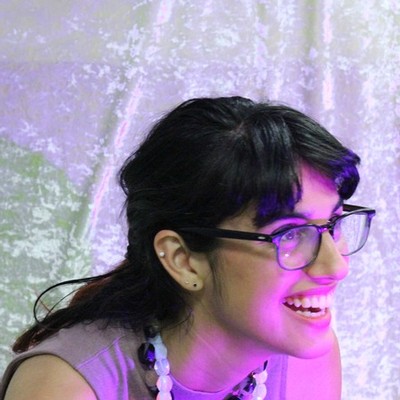 1. What interests you the most about IMGD? I like how IMGD opens the doors to be interdisciplinary. In a way, it’s a medium of mediums melding together in which I can express myself, explore interests, and conduct research.

2. What originally led you to studying IMGD? I was starting to see next level content on the internet and was really captivated by the mainstream cross-over of creative code I was seeing in interactive music videos, fashion week lookbooks, interactive documentaries and more. On the flip side, as festivals and museums were updating their public installations, I really thought IMGD would be a great place for me to mix art, code, story and technology.

3. What advice do you have for prospective students looking to apply to SCA? Be confident in what you want to try, especially if you don’t know anyone personally who could help you or it’s not what you think your peers would be interested in. Contact faculty and staff and you will be surprised at the type of feedback or support you could find.

4. How has this program prepared you so far in your career in entertainment? Coming from outside the entertainment industry, SCA opened my eyes to the sides and steps of the entertainment pipeline. I have the vocabulary and reference points to design experiences for people, and it has been great to witness and learn from visiting speakers and be able to show my work in festivals and partake in hackathons.

5. What have been your biggest challenges at USC? I strayed from my initial intentions to focus on web and public interactives, but at the same time, got into 3D, VR, and Motion Capture - none of which I had any knowledge of before. Entertainment projects are really a team effort, so it’s a lot easier to go with the flow of what other people like to do. By my final year I got better at speaking up for myself and what I want to focus on- even if it did not seem to fit in, or would require different a kind of support than the projects of my peers. (For example, it was challenging to do interactive video projects like Downtown Browns- since it was so rare for interactive and production to mix.) http://bit.ly/downtownbrowns

6. What are you involved in right now? Where can people find out more about your work? It’s hard not to be involved in too many things. I’m wrapping up JEEP JEEP- a motion capture project with a performance sound artist about connecting with ancestors and rebirth. I’m also touring an anonymous interactive performance project that I wish I could say more about :P. But since it’s my third year, I should mainly be focusing on my thesis project, Good Girl VR, visitors enter a frozen state of my subconscious and find performance art personnas that speak to the paradoxes of my intersectional American’t life. The personnas were filmed live-action using the Jaunt VR Lab camera through their experimental grant. People can find out more about my thesis at http://bit.ly/goodgirlvr and more about my projects at http://toniab.com

7. Anything else you would like to share? Everything that I’ve made here are USC has made been under the lens of the creative collective, Browntourage (http://browntourage.com). This means process-driven works that are both entertaining and very intentional with regards to the process, representations and message that empower queer and women of color in content and creation.