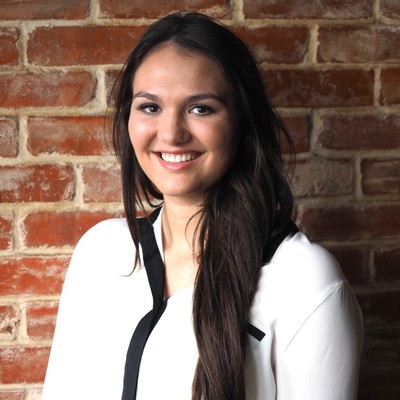 1. What interests you the most about CAMS? CAMS allows me to look at and explore movies from every aspect. I am able to watch movies and critically discuss them with other people who have the same passion about them as I do, but I also get to take classes in which I get to see the production side of movies. So I love getting to look at films from both angles and perspectives. Getting to see each side of the process, gives me more appreciation for the other.

2. What originally led you to studying CAMS? I always knew that I wanted to go to film school, just because I have always been fascinated with movies. The way that films are able to both entertain and impact people at the same time is amazing. Watching a movie is like being transported into another world. I know everyone can relate to the feeling that you get when you watch a film that really moves you. And I was interested in exploring that further, and hopefully someday being personally involved in that magic.

3. What advice do you have for prospective students looking to apply to SCA? When I was in the process of applying, I was really stressed out because being in SCA was my dream. So I think there was this looming fear hanging over my head, and I kept redoing my application, because none of the versions felt authentic enough-- I was too focused on sounding impressive and perfect. When I finally relaxed was when my application turned out the best.

4. How has this program prepared you so far in your career in entertainment? This program has prepared me in the sense that I feel confidently that I can hold an intelligent conversation about any aspect of the industry. CAMS provided me an all-around education of the film industry-- from the history of film to film theory to the production of film to distribution and the business side of film. I truly feel that whatever department I work in in the industry, the knowledge that I have from all angles will be useful, and honestly essential to being the best co-worker and collaborator possible.

5. What have been your biggest challenges at USC? For the longest time when I first got here, and into SCA, I felt like I was not good enough to be here. Which is crazy, because we all went through the same application process and they chose me just as well as everyone else. But because of the amazing reputation that it has, as well as the caliber of many of its students (and the amazing work that I saw coming from them), I was extremely intimidated. Sometimes, even in senior year, I still wonder if I am good enough to be here, but I just have to remember that they chose me and wanted to see what I can do-- also, it is a film SCHOOL, we are all here to learn together and most of my first films will be really bad, but that is just part of the process. I have to fail in order to learn, and even though that is a little scary, it is essential. No one is judging me, it is all in my head.

6. What are you involved in right now? Where can people find out more about your work? Currently (over the Summer) I am working on the set of Chicago Fire for NBCUniversal in Chicago as a production intern, which has absolutely been the best experience of my life. I got the internship through networking, and I would recommend anyone looking to get into the film industry to do as much of that as possible. USC and SCA together do an amazing job giving students opportunities to network.

7. Anything else you would like to share? I am kind of shy naturally, so this was personally difficult to me, but some of the best advice I can give you is that you are in the best place in the world for learning film-- you are surrounded by extremely knowledgeable professors and incredibly talented students (the best of the best). Take advantage of that.