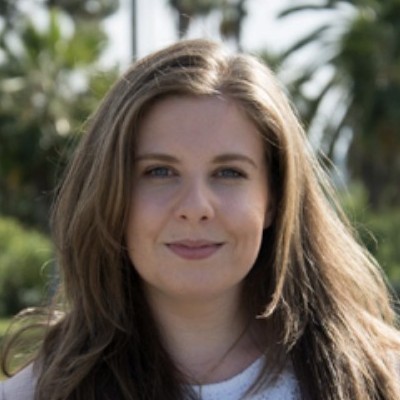 1. What interests you the most about producing? For me it’s seeing an idea come to life through the various stages of production. From that very first concept to the final product, each step that you take to make that content is fascinating and exciting in it’s own way. A producer is really the only person on a project that gets to witness that and see an idea grow from start to finish. Now there are more options to get your work seen with the growth of digital platforms and as a producer it’s a fantastic time to be able to have such a variety of ways to distribute and reach an audience.

2. What originally led you to producing? I had previously done a degree in Digital Film and Television where I had the opportunity to experience other departments but I knew that I wanted to start developing projects from the early stages of production. I had worked as a freelance production runner back in the UK and eventually ended up in casting but I still had that desire to be working on projects that were going through the motions attaching talent and finding finance to get the project off the ground. I knew that to do this I would need a better understanding of that side of the industry, and this led me to the Stark program.

3. What advice do you have for prospective students looking to apply to the Peter Stark Producing Program? My advice to prospective students is to be honest with yourself about your own personal taste in film. Everyone is different but the most important thing is to understand what you like and to be able to communicate about why you like it. My second piece of advice is to be constantly watching what’s coming out via various distribution platforms, from digital to theatre so that you know what the popular shows are; this will allow you to be active within class discussions and also hopefully help develop your taste as you progress.

4. How has this program prepared you so far in your career in producing? The Stark Program gives us an in-depth look behind all the components that bring together a production. From agents to showrunners, the Starkies see it all and learn from industry professionals that take each class. To better prepare the students we are also encouraged to take internships that will give us first hand experience. The summer internship program that Stark has set up is incredibly beneficial, not only do we find ourselves at well renowned companies, thanks to the Stark reputation, but you will also notice that each student is spread out across the industry. Quite literally if you want to call a company or an agency, the chances are there will be a Starkie there ready to take your call.

5. What have been your biggest challenges at USC? One thing that a lot of students don’t talk about is the cost of tuition. For some it is a challenge, and can be something that will distract you from your studies. The school does offer a handy payment plan, which can help reduce and spread out that stress of making the tuition payments. The program does ask a lot from you, and you will find that you devote the majority of your time to it over the two years. Finding a healthy balance is important, and time management is something that I’ve generally been pretty good with, however, we’re all ambitious, and with internships and classes it’s easy to let the workload stack up, so being prepared is definitely key to minimizing the stress and anxiety that can develop.

6. What are you involved in right now? Where can people find out more about your work? I’m currently interning full time at Michael Shamberg’s production company. During my own time I’m developing a slate, which includes working on a webseries with a writer from the Writing Division at USC. I’m also writing a feature that will hopefully be a European/UK co-production, produced by another Starkie; and I am broadening my contacts and working with other new talent outside USC.

7. Anything else you would like to share? The Stark program is a fantastic opportunity to learn from some of the most influential people in the industry. You'll also start to make those valuable contacts while you're a student, which will be enormously beneficial upon graduating. If you’re interested in becoming a creative, entrepreneurial, producer then this is a great step toward that goal. You’ll also become part of the Stark family, which makes it even more rewarding.