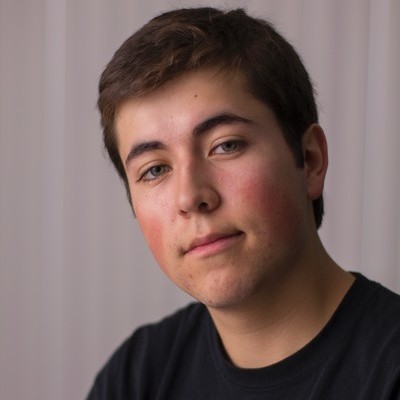 This story is part of a series profiling leaders of SCA's student-run organizations.

What is US Comedians and what is your role in the organization? I am the president of US Comedians, which is the student-run, auxiliary club to the USC Comedy Program. The club allows students to meet other like-minded filmmakers as well as working professionals in various comedy fields.

What kinds of activities does your organization sponsor or support? About every other week, we bring in a guest from the industry for a small discussion. The intimate setting gives students more face time with people they only get to see at the front of a crowded theater. We also run a monthly screenplay book club.

What are you, personally, studying and how has being involved with US Comedians, enhanced your studies? I am a junior Critical Studies major. Often times when we discuss movies and TV shows, we approach them from an artistic, cultural, and societal standpoint. It’s easy to get lost in the glamor of the art form and forget that a bunch of BS probably happened in order for the film to make it to the screen. The guests that come in for US Comedians serve as a reality check with their “war stories” from this nutso industry.

What advice do you have for prospective students looking at applying to your program? Get on set as much as you can. Learn as much about the practical side of filmmaking, but don’t skimp out on learning film theory. Knowing film theory pays off down the line way more than you could ever expect. All the great filmmakers we admire know theory.

How has the School of Cinematic Arts prepared you, so far, for a career in your discipline? I’ve met a ton of people I want to work with until the day I die. Through various clubs on campus I’ve managed to work on a bunch of different comedy formats, which has given me ample opportunities to fail. The more you fail, the better you get. So when it comes time to be played for something, hopefully I’ll have enough failures under my belt to succeed.

What have been the biggest challenges for you at USC? Juggling my time. I have an 18-unit course load. I’m the president of US Comedians. I’m the editor-in-chief of USC’s Onion, The Sack of Troy. I’m a senior producer on a Weekend Update style show called The Breakdown. And then somewhere in there I have to squeeze in a social life. I didn’t make it easy for myself. But I’d rather be drowning than sitting on the beach wishing I was in the water.

What in your past has given you inspiration or a unique point of view that you bring to USC? I don’t think I could nail down one thing. Many things have gone wrong for me to end up the way I have. I wish someone shared my point of view, but no one does, and I think that gap is why I’m drawn to comedy. I’m the outsider. Also I like seeing people fall down.

What personal projects have you worked on and/or are currently working on either with US Comedians, or on your own? I wrote a short with my buddy Chai, but we shelved because it’d be too hard to produce. He and I work on The Breakdown, so we pump out about a sketch a week in an Onion News Network format. We have a big action short to end off the season that should be script-locked in the next few weeks.