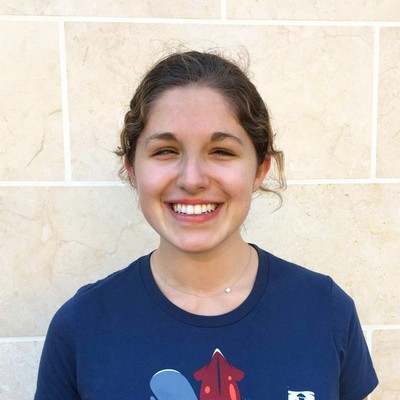 How has the School of Cinematic Arts changed your view of animation? Before I began studying at SCA, I had a love for animation as a consumer. I could pick out smaller details than most, such as if something was animated on ones or twos, but I lacked the introspection of a professional. Now, I can see a cartoon, movie, or short as a professional. I know the process behind each shot, how a story progresses from writing to boarding to animation to post production. I have a newfound appreciation for tinier details I never knew existed before SCA, such as the skills of storyboarders on "Adventure Time," or the color design in "Kubo" to determine a mood, or how dozens of people with drastically different backgrounds somehow collaborate and manage to make shows, movies, and generally, art.

What advice do you have for prospective students looking at applying to your program? The advice I see most often for aspiring animators is DRAW! DRAW! DRAW, which is amazing advice that forces you to improve whether you want to or not, but it’s incomplete for a program like USC’s. I’ve noticed that everyone in my year has some kind of specialty, be it cut paper animation or 3D animation for virtual reality installations or storyboarding for advertising, that they hone and turn into a career. Find whatever this ‘specialty’ is for you, whatever aspect or aspects of animation you love the most, and push them. Stay up far later than you should and practice it as much you can. You’ll be admitted for an amazing sand animation, or a cool puppeted play, or an astounding animated sequence set to orchestral music, rather than simply your artistic ability. Individuality stands out more than technical skill.

How has the School of Cinematic Arts prepared you so far for a career in animation? Without a school like SCA as a background, I never would’ve know what software, techniques, even file naming conventions are industry standard. You can learn to draw or animate with nothing but a ton of paper and an internet connection. But operating like how an actual studio operates, with industry standard software and a collaborative environment, is something you can only get at a school like USC. Actual classes will only take you so far. The real magic happens when you meet with a professor weekly, begin doing your own projects, and learn about the industry you wish to enter.

What have been the biggest challenges for you at USC? I come from a very academic background. During high school, I would stay up late into the night doing homework for my classes, stressing about getting my GPA or SAT or ACT score acceptable for college. It was stressful, but simple, as I had a numerical representation of my abilities and worth in the academic system, and all I needed to do was raise it. Now, I’ve had to learn to prioritize. I purposely choose to slack off in some classes so I can graciously overachieve in animation-related classes. I’ve realized that just completing classwork won’t do much good if I’m not thinking about reels, portfolios or where it’ll get me in the long run, whether or not I even like what I’m doing. Now I choose a project or two a year to throw myself into, and manage to score average on the rest. It took me all of freshman year to realize how to prioritize my passion over everything else, but it’s served me well. I’m doing just as much work as I have in the past, but this time, it’ll actually do me some professional good.

What in your past has given you inspiration or a unique point of view that you bring to USC? I’m probably the purest visual storyteller you will ever meet. I mean, I’ve watched cartoons since I was a toddler and never stopped. But that isn’t really unique in my field. What is unique is my distaste of reading. I know, it’s terrible but I’m an excruciatingly slow reader who gets headaches after reading a page and can barely recall what I just read. I rarely read books or articles, or assigned class reading—except for animation! And I get pretty annoyed when a film directs me to read a letter or newspaper or even a sign. But, I still love telling stories. Animation and storyboarding specifically, has always been the best way for me to tell a story. In that sense, I learned to marry dialogue, shot composition, and poses in one fell swoop, which I think, makes for better storytelling than the staggered script-board-film/animate method so commonly used.

What personal projects have you worked on and/or are currently working on?