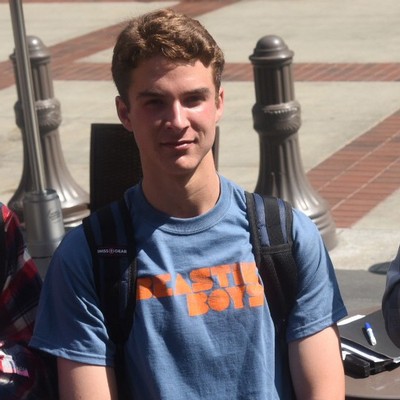 How has the School of Cinematic Arts changed your view of your discipline? Prior to coming to SCA, most of the work I had done had been on my own. If there is one thing that I can take away from this program, it's the importance of collaboration. There have been numerous times when my short films or my partners' short films vastly improved because of a simple suggestion or idea. Working together is one of the most important elements to a successful career in the film industry, and SCA provides a solid foundation for mastering that particular skill.

What advice do you have for prospective students looking at applying to your program? Do what you really want to do. It sounds simple enough, but if you're not interested in a course you chose to take, it's going to show. A lot of times, people will tell you to take certain classes solely because it is better for advancing your career, but if you don't have the passion for it, then it is almost impossible to make a project that is meaningful to you, which makes it that much more unlikely for the audience to connect with your films.

How has the School of Cinematic Arts prepared you so far for a career in your discipline? SCA has instilled a great number of filmmaking concepts to help tell your story, but without a decent story to tell, there really is no point in telling it at all. And the biggest realization for me here is that if you don't have strong, interesting, and relatable characters, then it becomes that much more difficult to tell a good story. After going through the process of creating a short and also watching several of my classmates' films, it is clear to see when a filmmaker makes a film that they really care about. Those are typically the ones that really strike a chord. To put it simply, if you don't bring a point-of-view or a theme to your film, then it likely will not resonate.

What have been the biggest challenges for you at USC? So far the biggest challenge for me has been to have confidence in what I'm creating. So many of my classmates have an incredible level of experience they bring to the table (some even have extensive professional work), and I had only done film as a hobby before coming to USC. So for the first couple of weeks, I thought there was no way I could possibly stack up, which I think had a negative effect on the work I was doing. As soon as I realized that, I decided it would be better to challenge myself to reach their level. Since then, I feel the quality of my work has grown, although that doesn't mean I still don't have to try. Also, it's incredibly important to learn as much as you can. Pay attention on set and really examine what works and what does not, and don't be afraid to ask questions.

What in your past has given you inspiration or a unique point of view that you bring to USC? The type of films I took to when I was younger are worlds apart from what I consider to be my go-to genre nowadays. I used to love giant blockbusters that were huge in terms of scope and scale (and budget), and while I still enjoy them, the films I like watching the most now are a bit smaller and focus more on everyday life. I've once heard it said that it's the small, unusual moments that really stick with you, and I've found that to be incredibly true when it comes to film. Filmmakers like John Hughes and Judd Apatow are among those I look to for inspiration, especially because both are terrific at creating relatable, human characters, and while their stories are comparatively smaller in scale to big action blockbusters for the most part, they have had tremendous staying power.