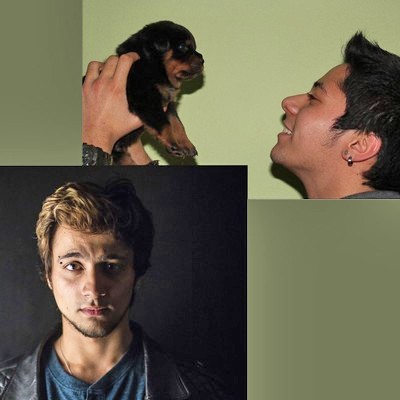 Jazzar Brothers' music can be found:

How has the School of Cinematic Arts changed your view of your discipline filmmaking? MRJ & BSJ: Even though we had our own agenda on mind beforehand, the purpose of us coming to the University of Southern California, School of Cinematic Arts Summer Program was to determine whether or not we were interested in certain aspects of filmmaking. Thanks to the extensive content of the program, we have been able to experience the various aspects of filmmaking such as screenwriting, art directing, directing, editing and producing at the same time and understand the correlated aspects of each segment. This has tremendously enhanced our perspective towards our future goals and, thus, we have decided to enroll in producing and screenwriting.

What advice do you have for prospective students looking at applying to your program?MRJ & BSJ: Whether it’s screenwriting, visual effects, or makeup design for cinema, it is imperative that you try to plan for all the necessities for your respective course beforehand. As time goes by, you start to realize that the timeframe you had measured weeks ago narrows down much faster than you originally had in mind and things can get really stressful before you have a moment to call the shots. In the end, to not wish for that “If I had one more day, only one day” idiom you better start preparing the moment you make your decision. As they say in the industry, you will never be ready enough.

How has the School of Cinematic Arts prepared you so far for a career in your discipline? MRJ & BSJ: If we were to list the experience we had gained at the Summer Program of the School of Cinematic Arts for our future career in filmmaking, the top selection would definitely be filled with; dealing with the intense and demanding aspects of filmmaking such as tight timeframes, endless array of obstacles, aiming to achieve perfection and determination. We learned that once you hit day one, there is no going back and you must commit the best of yourself in order to finish your film. Lastly, we can say that we also learned the true meaning of some of the most repeated lines in the business such as “Deal with it”, “Getting things done” and “If you are early, you are on time; if you are on time, you are late and if you are late, you are fired!”

What have been the biggest challenges for you at USC? MRJ & BSJ: Time has really been of the essence, especially when unexpected issues popped up. To give a more in depth example to a couple of them: we had a flat tire on our car miles away to our residence on the night of our final post-production date. We managed to find a tower and car-mechanic in the middle of the night and get the car fixed in a hour, however, those lost minutes were gone for good and it helped us understand the value of time more than ever.

Another one was when one of our actors had to leave earlier than we planned due to an unexpected event. Even though it was unprofessional by him, stating this to him wouldn’t help the fact that we had to overcome this obstacle. So in order to handle this, Reyyan had to fill in the actor’s role. It was of course not good as the performance we aimed for; nevertheless, it served the job well.

What in your past has given you inspiration or a unique point of view that you bring to USC? MRJ & BSJ: We believe that everything in one’s life inspires them to bring fantastic ideas on the table for filmmaking. In our case, we could say that the cities we travelled, the relationships we had with people and our desires were our true harbors for inspiration. Also we think that one must never forfeit the chance to experience a crazy, one in a lifetime idea.

What personal projects have you worked on and/or are currently working on? MRJ & BSJ: We shot two films in two weeks on our own. The first was about the elegance of simplicity within art and, the second was about a political conspiracy surrounding imprisoned journalists throughout the globe. We are still currently on the post-production stage for both of them as our crew was only consisting of the two of us for the entire production process. The reason why we didn’t hire anyone to help us with cinematography, editing or sound design etc. was for us to learn things on our own. In the end that served us well by developing our skills in filmmaking on a wide array of aspects.

Lastly, we would like to leave our social media information for anyone who would like to contact us in order to contribute to the formation of a circle for international filmmakers.