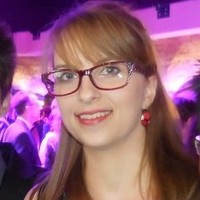 Through SCA’s Interactive Media and Games division, Catherine Fox ’16 has harnessed her love of game design and was a member of Team Overly Kinetic that took home the BAFTA Ones to Watch award this year for their original game Chambara. Fox recently discussed her intense passion for games, the importance of games as a way to connect with others, and the power of friendship and collaboration as she develops Chambara for a commercial release.

What motivated you to choose Interactive Media and Games as an emphasis of study and how has SCA changed your view of this discipline? I’ve had a passion for games ever since I was little. It was always a dream of mine to make them for a living one day. I applied to all the games-centered programs I could find, which were few and far between at the time. USC has undeniably the best games studies program out there, but honestly I wasn’t fully aware of that when I decided to study here. USC was giving me some really good vibes, however unprofessional that sounds, and I decided to go with my gut. I feel blessed that my instincts were right. I can no longer see myself anywhere else.

When I entered the IMGD program, I had no idea what was involved in making a video game. The only thing I knew was that it was a thing that people did and I wanted to know how. SCA has since educated me in all aspects of the craft. I see video games now, not only as a source of entertainment for the individual, but as a way of sharing experiences with others. I have a new understanding of play and how it plays a vital role in our lives. IMGD has really opened my eyes to the possibilities of play, and I’m honored and thankful to be a part of the program.

What advice do you have for prospective/current students in your program? I cannot emphasize enough the importance of making friends. You will learn, suffer, and grow throughout this program and it’s best to do it together. Even if it’s just one or two people, you’ll learn more and have way more fun with them than on your own, and needless to say having friends opens up opportunities you never knew you had.

For example, when I was a freshman I became close with two people in particular, Kevin Wong and Esteban Fajardo. We spent a lot of time together, we sat together in class, we became friends thanks to all the Welcome Week events we attended, and we just stuck together since then. We made things together and we helped each other learn. A year and a half later, one of our professors suggested we enter Dare to Be Digital, and that was that. We went to Dare to Be Digital last year and made a BAFTA-celebrated game together. The team isn’t complete, of course, without Tommy Hoffmann and Alec Faulkner. We brought them on a little later and I’m so glad to have worked with them. We’re all close friends here in Team OK. None of that would have been possible without each other, and I would never had applied to the program at all if we hadn’t been together when we heard about it.

How has the School of Cinematic Arts impacted your creative vision and growth as a game developer? SCA has surrounded me with a diverse, talented group of people. It’s because of these people that I’ve learned so much about game design. Being here has made me aspire to make games that people can enjoy together. I want to build experiences that people can share with each other.

What in your past has given you inspiration or a unique point of view that you bring to USC? My parents were both military air force when they met. I hear a lot of stories from my mother about her time as a gender minority throughout her college days at the Air Force Academy, during her time in the Air Force, and still today as a female airline pilot. I look up to her often because I find myself in a similar situation; the gaming industry was male-dominated for the bulk of its history, and I often find myself to be the only woman in the room.


Looking to the future, how do you see yourself and your work evolving? In the future I’d like to see my work cover a range of different genres and I’d like to add my take on each of them. I see my games taking on familiar genres with my own personal twist to them. As for myself, I see myself getting tougher. It’s a necessity to have thick skin going into the professional world, outside the safety of university life. There’s less room for failure out there, and I’m going to have to grow up a little more as I go. I won’t ever lose my optimism, I don’t think, but the road before me is definitely a tough one, and it’ll shape me in the years ahead.

What have been the biggest challenges for you at USC? I suppose the biggest challenge I had coming into USC was learning to feel like I belonged. I felt so out of place when I first arrived; everybody in my class seemed to know what they were doing already, and I panicked. It took me a while to realize that we’re all in the same boat here, and we’re all in this together. Learning to be comfortable with myself and opening up to people around me was definitely a challenge, too.

Where can people find more about your work? You can find out more about Chambara and Team OK at chambaragame.com. I have a personal website at thatcrazyfox.me. Don’t bother with LinkedIn; they don’t have a profession category for game design.

What are you currently working on? Right now we’re continuing work on our game, Chambara. We’ll be developing it for commercial release on consoles, which entails a ton of tweaking, polishing, and building before it’s ready, not to mention setting up the legal side of things. We’ll be developing it as an Advanced Game Project within IMGD (if they choose to accept our pitch), and we’re aiming for a release in Spring 2016.

What was your experience at the BAFTA Ones to Watch Awards? Oh boy…It’s hard to say if we were expecting to win or not, because while our game was very unique and interesting, there was still some prime competition with the other teams. Whether we were expecting it or not, and despite all our preparation, I don’t think we were quite ready when they called our game as the winner. It was a huge honor, and a huge shock to our systems. Giving the acceptance speech, I was shaking so badly I thought I was going to faint or fall over on stage. I don’t think you really can be ready for something like that, but I think we handled it gracefully…if you forget all the bad puns we made to the press backstage.

After the ceremony, everyone was kind and congratulatory and we had a great deal of friendly conversations with other attendees. The whole event was like a giant party and I’m honored beyond measure that we were included.