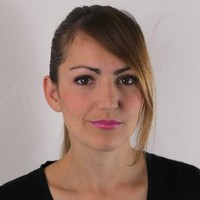 How has the School of Cinematic Arts changed your view of producing? I came from a country where the film industry is starting to develop and standardized producing practices are yet to be established. Coming to SCA gave me the opportunity to learn how to produce and collaborate in compliance with industry conventions in order for work to flow smoothly. I would really like to be able to adapt these protocols to the Mexican film industry so they can then help accelerate both its development and its chance to take part in the opportunities brought on by digital media. Direct collaboration between students and industry professionals has also given me valuable insight into trying to help the development of the Mexican film industry. For instance, pushing the U.S. and Mexico to take advantage of their geographical proximity for co-productions. As someone who grew up on the border, collaborations between the two countries can allow for interesting work to happen, but can also promote cultural understanding.

What advice do you have for prospective students looking at applying to your program? It is important to try to define your career goals as much as possible so that you can choose the program that is right for your needs. The Stark program is amazing. It provides you with both the creative and business-minded tools you need to find ideas and take them to the screen. It is definitely the program most tailored to creative producing, and it also helps you define what kind of content you want to produce from today’s plethora of options: TV, Film, digital and more.

How has the School of Cinematic Arts prepared you so far for a career in producing? Having the Stark program be within the frame of the School of Cinematic Arts is a great opportunity to obtain a more integral film education. You can learn about any discipline that you are interested in as well as acquire hands-on collaboration experience with students from those divisions.  You can graduate with a portfolio that includes projects from any discipline(s) that you want to try. Personally, I was able to produce a stop-motion animation project. It was a very interesting and insightful experience to work with animators and to learn about the professional workflow specific to this discipline.

What have been the biggest challenges for you at USC? USC offers so many amazing opportunities, that I would say that the biggest challenge has been trying to decide which roads to take. I would love to be able to take classes from every division in SCA, try all types of internships, attend every screening and event, but I have to manage my time wisely to take full advantage of the Stark program itself.

What in your past has given you inspiration or a unique point of view that you bring to USC? Having received my initial film training in Mexico where resources are more limited, I feel that when I’m involved in a project, I bring a resourceful and creative problem-solving point of view to the table. I also bring a native understanding of Mexican and Latin American culture, which I believe is important today considering that the ever-growing Latino audience is demanding content.

Where can people find more about your work? Most recently I started Off-Hollywood Films, a production company with my partner Rodrigo Iturralde, through which I am producing my first feature documentary Kiliwas at Dusk. The film is about a millenary native tribe in the northern Mexican desert whose language and culture is about to disappear. The film is set for release in late 2015 through the Mexican Film Institute. You can find updates about the project at http://gina991.wix.com/off-hollywoodfilms. I am also producing a stop motion animation short film entitled The Healing Tree, which is one of the 4 special Stark projects selected for production this year. It will then be showcased in SCA’s First Look 2015. Prior to this, I produced ten short films and directed another five while in undergrad at CUEC-UNAM (The Mexican National Autonomous University film school). Some of the films are now online after having appeared in many international film festivals including Clermont Ferrand, Bangkok, CineDones, Viña del Mar, Cancún, and the Mexican Academy Awards.