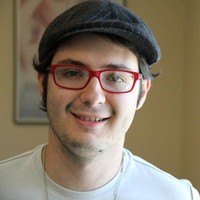 How has the School of Cinematic Arts changed your view of screenwriting? First of all, and I think most importantly, SCA has made me love screenwriting even more. I wanted to work in the film industry ever since I was a child, and I have always loved and had the need to write in one way or another. When the time came to choose a major, screenwriting seemed like an obvious option since it combined both interests. But I didn’t have any previous experience with it, other than some minor high school projects. I had mostly written short stories, and my interaction with movies was limited to enthusiastic watching. I’d never been involved in the process of actually “making a movie” before. Being at SCA has really opened my eyes into all the passion, energy and time that go into writing a script, which I believe is the core to every movie. There are things that as a viewer you take for granted when you watch a film and never realize that someone had to come up with. It’s harder (and, at times, more frustrating) than it looks, but it also gives you a sense of power and freedom over the story that you don’t get by simply watching it. I’ve had the opportunity to experience what it’s like to be on the other side of the screen, and I have to say I love it even more here.

What advice do you have for prospective students looking at applying to your program? This is going to sound like the most clichéd phrase, but just be yourself. Yes, SAT scores and high school grades do matter, but all of us are fortunate enough to be in a school where the most important thing is our artistic potential and what we have to say. The only way that is going to come through is to put yourself out there in your application. If you have a passion for watching films and you want to write them, and that comes out, you’re basically there. Don’t worry too much. I never had any previous experience with screenwriting and here I am. You don’t need to be an expert. That’s why you’re coming here.

How has the School of Cinematic Arts prepared you so far for a career in screenwriting? I have only been here for almost a year, so I know there are still so many things to learn about my discipline and the film industry in general. But in the relatively short time at SCA, I’ve learned how the movie and television business works, and what the ideal way to enter it is. But besides the more technical stuff about screenwriting (format, the three-act structure and narrative drive, among other terms), SCA has taught me how to relate with other filmmakers and that networking is the most important thing you will ever need. That is a word that comes up way too often, but there’s a reason for it. Movies are a team effort, and you need to learn how to work well with others, even in a craft that is solitary most of the time, like script writing. No one can make a movie alone.

What have been the biggest challenges for you at USC? Coming from a different country (I was born and raised in Mexico), I would have thought before coming here that adjusting to a different culture would be the most difficult thing, but I was pleasantly surprised that it wasn’t nearly as hard as I thought it would be. I guess film is a universal language, huh? But what I have found to be the most challenging aspect of being here is probably having this enormous world of possibilities laid in front of you when you enter film school and not being sure what to do with them. What types of films should I write? Should I go for film or television? When is the right time to intern? Could that girl that is sitting across me give me a job in the future? The uncertainty of everything is scary, but is also what makes this journey the more exciting. Also, I miss Mexican food. So. Badly.

What in your past has given you inspiration or a unique point of view which you bring to USC? As I mentioned, I definitely think that coming from a different cultural background has given and will continue to give me a unique perspective to not only the things I write, but to the entire SCA experience. I love my country. I am proud to be Mexican, and I want to transmit that passion to everyone here, both through my work and myself. My country, my friends and my family made me who I am and I couldn’t be here without them; I constantly draw inspiration from them. Being bilingual also gives me a whole other range of possibilities in which to express myself, something I believe will be very useful in the future. And if I were to get all film-schooly, Darren Aronofsky, Charlie Kaufman, Lemony Snicket and Agatha Christie would definitely come up as inspirations that I someday hope to resemble.