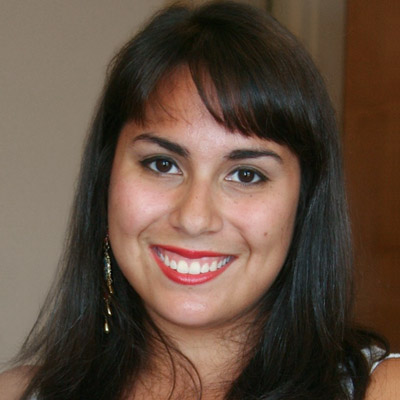 How has the School of Cinematic Arts changed your view of interactive media? Before attending SCA, I really did not fully understand what Interactive Media was, other than it simply being related to video games. Now I have come to realize that interactive media covers so much more than just games, and even games cover so much more than just the typical, big-name best-sellers. After taking CTIN 309, Introduction to Interactive Entertainment, I started to look at games on a more broad scale. I now see games as an aid in social structures as well as entertainment. I was unsure about my major prior to attending, but now I realize that there are so many areas in which I can explore and learn about that are not what you initially think about when you hear interactive media.

What advice do you have for prospective students looking at applying to your program?

Film still with makeup effects by Miranda Due

Don't be afraid of the application! I remember looking at the requirements and thinking I only sort of had what they wanted. I was so unsure that I almost didn't apply, and I did not submit on the due date. Thankfully a miracle happened and the deadline was extended, and at that point I realized I might as well just give it a shot. You really don't have anything to lose, so don't second-guess yourself.

How has the School of Cinematic Arts prepared you so far for a career in your discipline? SCA has provided me with something far more beneficial than any other school or class could, and that is a strong network. Coming from Oklahoma, my industry contacts were rather sparse, but I now know so many talented classmates that I know will have my back in the future. SCA has also opened up many new doors for me by allowing me to explore new areas in film and media. I am equipped with skills in various fields that I can continue to pursue once I graduate.

What have been the biggest challenges for you at USC? Makeup effects by Miranda Due

My biggest challenge at USC is probably time management. It was quite the struggle in the beginning, but I've come a long way since that first semester. There is so much to do at USC, and I wanted to do it all.  I have been so fortunate in that I have been involved in many groups and projects, but I have had to learn to say no to people. I also found that joining the rowing team helped me organize my time and keep me accountable both physically and academically. It is very easy to get overwhelmed here, so figure out what you really want to spend your time on and learn to say no to other things.

What in your past has given you inspiration or a unique point of view which you bring to USC?

My life has been quite unique, starting from being adopted. I grew up with no genealogical limitations or expectations, which has really allowed for me to be a blank canvas and shape my own future together. Because I was not afraid to try new things, I have had some great experiences that give me inspiration every day. One of my most memorable experiences doesn't necessarily give me inspiration, but it taught me a lot. I spent two years at the Oklahoma School of Science and Mathematics, which was a boarding school. Eating every meal, attending classes every day and spending any free time and study time with the same people definitely had its challenges, but I really learned how to observe people there. I learned how to let people inspire me and help me create things, which I think is more important than any specific incident of inspiration. Growing up in Oklahoma also gives me a different point of view. Having been raised in the middle of nowhere with a strong American Indian heritage also gives me a unique perspective and motivation.