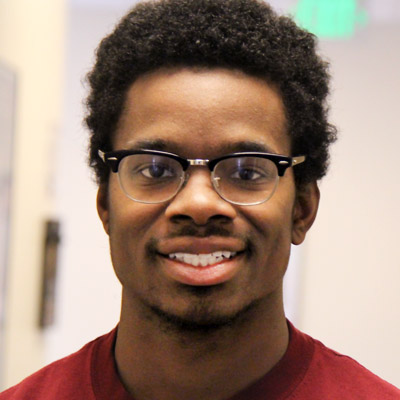 How has the School of Cinematic Arts changed your view of filmmaking? Before coming to film school, I wanted to be a writer/director/producer because to me, that’s what filmmaking was all about.  I learned a very guerilla filmmaking style where my friends and I never gave much thought into cinematography, sound design or even production design.  The city was our landscape and the camera was our paintbrush. Tarik lining up a shot

Coming to SCA, the program forces you to learn disciplines you may not be familiar with. Working in different disciplines makes you realize that every position on a film set is essentially being a filmmaker.  In order to be a good cinematographer, you must be able to understand story beats and character arcs, the same with sound and production design.  Working in these positions has given me an understanding of [these] duties, so that as a director, when I collaborate with a cinematographer or a production designer, I can communicate my vision in terms that apply to that position.

What advice do you have for prospective students looking at applying to your program? Don’t let the myth of “USC being only about Hollywood films” deter you from applying or coming to SC.  There are a lot of filmmakers and faculty members that work in all forms of filmmaking, from experimental to documentary to personal filmmaking.

Just last semester in my 508 class, we had students making zombie films, we had a handful of social issues films, and we even had a music doc.  The same faculty that were able to critique an action comedy one minute would be able to switch gears and critique my homeless love story the next.  At SC the diversity of students and faculty is beneficial because you develop a wider perspective that improves your overall work.

How has the School of Cinematic Arts prepared you so far for a career in filmmaking? Well, since being at SC, I’ve worked on over 34 films in every position possible.  I’ve seen films from inception, to script, to shoot, to the finished product. On each film everyone tries their hardest to do something they have never done before, and whether you fail or succeed, you still walk away better than before you started. With classmates in the SCA Courtyard

Being around other emerging directors allows you the opportunity to pick each other’s brain.  In the industry you’ll never be on a set and ask Christopher Nolan why he chose this shot, or ask Wally Pfister why he lit a scene that way. With so many opportunities to learn while doing, I will go into the industry more confident about my abilities than if I were to spend years crewing on big films.

What have been the biggest challenges for you at USC? Being able to take notes.  When you set out to make a film, it’s your vision originally, but you need help getting your vision to come to fruition.  Some notes you will receive on your work will be great and will help you tell the best story you can.  Others will confuse you or hurt your story.  Being able to decipher what notes you can use and which you can’t will be a constant struggle, not just here but in the industry as well.

What in your past has given you inspiration or a unique point of view which you bring to USC? A lot of the people I grew up around went to jail or fell into some form of obscurity.  Then I went to college where everyone I was around was on their way to successful careers.   The people I grew up with didn’t differ too much from the people I went to college with.  They bleed the same blood, they cried the same tears, and they even laughed the same laughter.  Unfortunately, they caught different breaks in life.

I say this to say that people, no matter the race, gender, or socio-economic status, don’t differ.  We are all human beings trying to make sense of this crazy world we live in.  I bring that perspective to every character I write, every actor I direct and every story I tell.